Let those who served know there’s someone who cares 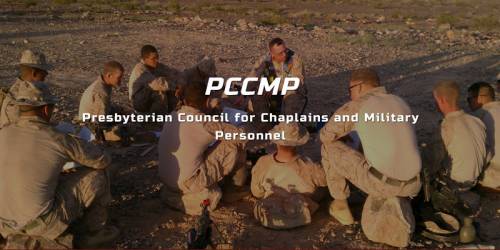 According to the Rev. (Capt.) Lyman M. Smith, director of the Presbyterian Council for Chaplains and Military Personnel, “more than 18 million veterans live among us. And of those 18 million, some 18 are likely to die by suicide today.”

While there is no all-encompassing explanation for veteran suicide, the Rev. Michael Gillespie, a retired Veterans Administration chaplain, says contributing factors include economic disparities, homelessness, service and social connection, and health and well-being, which apply to the general population as well.

Most veteran suicides involve firearms. And veterans have greater access and more familiarity with firearms, which is why “gun violence and gun control are somewhat related to this topic,” Gillespie said.

What is alarming to Gillespie is the dramatic increase in veteran suicides among both younger and older veterans.

Among the report findings:

The report defined a veteran as someone who had been activated for federal military service and was currently not serving.

According to PCCMP’s Smith, more veterans seek help in faith communities than in hospitals, which is why chaplains like Gillespie encourage people in PC(USA) congregations to build bridges and human connections to the veterans in their midst.

“Veterans tend to get isolated because they no longer fit in at their social gatherings,” Gillespie said. “But they need social connections.”

Gillespie, who served as the chief chaplain at the Roseburg (Oregon) VA Healthcare System before retiring in April 2018, believes the VA remains the pre-eminent place with the expertise to deal with veterans’ mental, social and spiritual needs.

Calling chaplains “subject matter experts,” he said they address social connection and the health and well-being of veterans. They’re also an integral part of suicide prevention and other interdisciplinary teams at all VA medical centers, he said.

Chaplains interface with local faith communities, Gillespie noted, providing faith leaders and parishioners with resources and education about the military culture and warning signs for veterans in crisis. 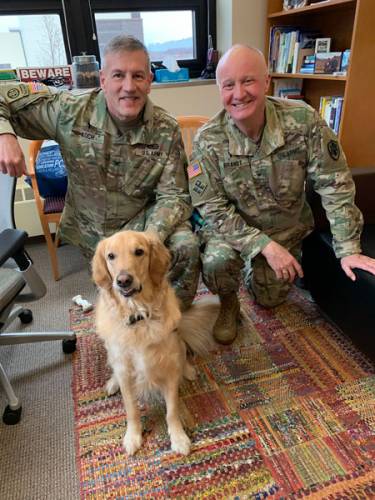 Brigadier General Ed Brandt, an ordained PC(USA) minister and the deputy chief of chaplains for the Army National Guard, is pictured with Col. Rick Koch, state chaplain for Alaska, and a therapy dog named Bolt. (Photo courtesy of Ed Brandt)

Brigadier General Ed Brandt, the deputy chief of the chaplains for the Army National Guard, says there isn’t a day that goes by where he and his bosses don’t think about trying to prevent suicides in the National Guard. In 2018, there were 123 members of the National Guard who died by suicide among 335,000 troops. The majority of those were single white men, ages 18–26. Most had never been deployed.

Through October 2019, the number of deaths by suicide among National Guard members was down to 65.

While there’s no explanation for the drop, Brandt believes it all comes back to relationships and community.

“We’re calling on people to connect, to be proactive, to let someone know there is someone who cares,” he said, adding, “there is a lot of emphasis now in training that teaches soldiers to say, ‘Are you OK? Are you hurting yourself?’”

In 2018, Brandt said, 700 Army National Guard chaplains in 50 states, three territories and in the District of Columbia did 1,800 suicide preventions while counseling 45,000 soldiers and providing 98,000 of them with worship services.

And yet there are only 72 full-time chaplains in the guard; the rest are part-time. Chaplains make up just two-tenths of one percent of the Guard’s strength. More than one-third of Guard troops say they have no religious preference.

“As an ordained PC(USA) minister, my faith tells me that life is valuable, that we are children of God,” Brandt said, “which is the message we’re trying to get out.”

The Veteran Crisis Line is a great resource for any veteran in crisis. The telephone number for the National Suicide Prevention Lifeline is 800-273-8255.

Lord, Prince of Peace, gird our congregations and chaplains with your love and strength as they care for all in uniform and their families. Amen.