How Presbyterian churches and other faith groups can combat gun violence 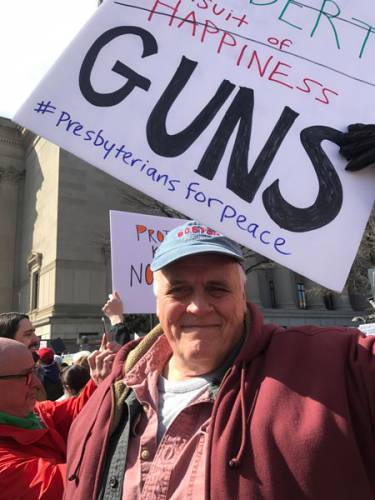 A decade ago, the advocacy group Heeding God’s Call to End Gun Violence helped to shut down a controversial gun shop in Philadelphia.

With the involvement of many different faith communities, “we brought nine months’ worth of public attention to this particular gun shop, which was selling lots of guns that ended up in crime and so on,” said Bryan Miller, the group’s executive director. “We eventually basically embarrassed ATF (the Bureau of Alcohol, Tobacco, Firearms and Explosives) into closing the gun shop.”

It’s an example of actions that faith-based organizations can take to try to stop gun violence. From neighborhood shootings to school-related incidents, guns continue to claim thousands of lives in the United States.

“Gun violence is a public health epidemic that impacts our communities, our congregations and our members — whether they know it or not,” said the Rev. Margery Rossi, who’s the moderator of the Presbyterian Peace Fellowship’s Gun Violence Prevention Working Group.

Rossi, pastor of First Presbyterian Church in Wappingers Falls, New York, recently spoke during a segment of the Standing Our Holy Ground webinar series. The webinar (available at bit.ly/36Pbn5h) also featured Miller and other experts who provided examples and suggestions about how to mobilize against gun violence and its devastating effects.

Panelists who spoke during the webinar included the Rev. Roy Howard, pastor of Saint Mark Presbyterian Church in North Bethesda, Maryland, and Corneilius Scott, founder of the Family Survivor Network in Baltimore.

During the webinar, Miller stressed the importance of contacting legislators and letting them know that the faith-based community is not limited to “radical right Christians.”

Before implementing a plan of action, it’s important to get your church’s session involved, said Howard, who has many years of experience working for change.

“You, as an active member of the church or an active pastor, elder leader of the church, can only do so much,” Howard said. “But when you have your entire leadership team engaged with you, and you’ve done the hard work of praying, of educating yourself and then doing the pastoral work of engaging and organizing, the effects of this in the wider community are going to be so much greater than if it’s one or two or even three people kind of working together.”

Actions that can be taken include writing letters; requesting personal meetings with local, state and federal officials; hosting forums; meeting with other members of the congregations for prayer and conversation; and working with other congregations and the community on initiatives, he said.

Miller promoted the idea of erecting “memorials to the lost,” featuring T-shirts with the name, age and date of death of people felled by guns. The memorials provide a way to draw publicity and reach the public.

Scott stressed the importance of not just focusing on where guns come from but on the social-emotional issues surrounding gun violence as well, especially in urban areas.

“Listening and learning and privileging the voices of the disinherited, having a trauma-centered focus, and three, broadening our focus to improve social-emotional understanding is critical,” he said.

Rossi noted that the Presbyterian Peace Fellowship works with churches around the country and can serve as a resource for those looking to connect with potential partners. It also offers a congregational toolkit on its website.

But you don’t have to be an expert to act, she said. “If you have a feeling that there is something wrong with having 40,000 people a year die by guns, that is enough to give you a platform to do something about it.”

Holy God, heal our broken world. May our responsive prayers and actions be rooted in your love and help rebuild lives and communities. Lord, bind us together in your hope and peace. Amen.