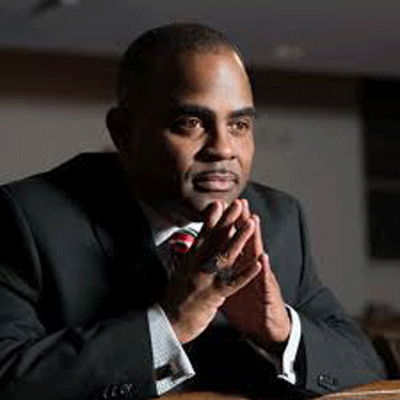 The Rev. Dr. Ralph B. Watkins

Saying that “love leads to justice,” the Rev. Dr. Ralph B. Watkins said his mother always told him that “God is on the side of justice.”

With that, Watkins, professor of Evangelism and Church Growth at Columbia Theological Seminary, explained why he chose to write about justice for the new 8 Habits of Evangelism resource produced by Theology, Formation & Evangelism.

“My mother said, ‘Boy, you got to write that lesson,’” Watkins said.

“That’s why I got involved,” Watkins told a digital audience gathered for the first of eight weekly webinars, which featured the authors of each of the eight identified habits of evangelism — justice, radical welcome, worship, sacraments, prayer, fellowship, teaching and generosity.

Watkins said his mother taught him a valuable lesson when he was a young Sunday school student about the importance of hearing and then responding to the church’s call to justice and equality.

In Sunday school, he was the star pupil. But his classmate Debra was much smarter than he was. On Fridays they would do the lesson together but on Sunday, Watkins was the interpreter.

One day his mother pulled him aside and asked him, “Why is it that Debra tells you everything on Friday, but you won’t tell about Debra on Sunday?”

And then she “left it,” Watkins said.

Eventually one Sunday Watkins told his teacher, Miss Thomas, that everything he knew was because Debra taught him. It’s the first time he remembers his mom saying she was “proud of him.”

“She taught me to see the injustice of sexism in the Black church,” Watkins said. “She showed me how it happened and that if you see something, you should say something. And I called it out. Debra was the brilliant one, not me.”

But for Watkins it’s not enough just to say something. One must do something for justice because Jesus showed us that justice is what love looks like publicly. In his writing about the practice of justice, Watkins says:

“The people knew something was different about the ministry of Jesus and they responded, they followed because as trite as it sounds, Jesus was a person of his word. He didn’t just preach the Gospel, he brought good news in word and deed.”

“Justice rights the wrongs, challenges systems of oppression, assaults systems of stratification and meets the needs of all. Jesus challenges the traditional order of things, the hierarchy and the staunchness of stale ministry that is locked in a building and rarely hits the streets.”

Watkins’ mother just had cancer surgery in Orlando, Florida. She’d had a blood clot. She couldn’t get an intensive care unit bed because all beds were being used by COVID-19 patients. One day, as Watkins sat with his mother at the floor of the hospital she was on, there were six blue calls. Coronavirus patients in their 30s and 40s had been moved to the floor, and they were dying.

When Watkins told his mother what the blue calls were about, she said to him, “You know you always wanted to be born in the 1930s and 1940s so you could have been part of the civil rights movement? Well, guess what? Now is your time.”

As they reflected together on what happens when a pandemic gets politicized — people losing their lives, more and more children contracting the virus, and a disproportionate number of people of color being affected — Watkins’ mother made lists of poverty and justice issues and how to organize to make the world a better place.

Telling him she didn’t have long to live, his mother said, “But I’ve got hope in you and those people you teach in that school in Atlanta that you will all make a difference.”

“We are in the midst of the greatest crisis of power in our lifetime,” Watkins said, calling it “an issue of justice.”

“But we’re going to be all right because we’re under the Word,” he said. “We’re going to complete the race. And prepare to hand the baton off to those coming along beside us and behind us. Because every generation has the struggle to fight. And my mother will smile on us here and when she goes up to glory.”

Great God, bless the hearts and hands of those who work in your name. Bless those they help, those with whom they travel, those who host them and those who hear their stories. Give us heart to live as witnesses in all the places where the presence of faith shouts hope, despite all the chaos of our world and its disasters! Amen.