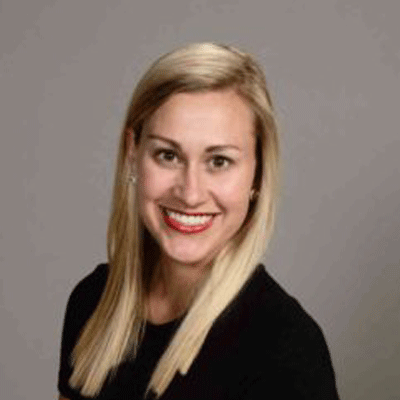 For really good ideas on how to serve the faithful at Park Ridge Presbyterian Church in suburban Chicago, the Rev. Amanda H. Joria often relies on her mother.

On St. Patrick’s Day, that idea involved Joria dressing up in the Irish step dancing costume — complete with a bouncy, curly wig — that she’d last worn at age 15. With an eye toward downsizing the house, her mother had brought the costume and wig by Joria’s house. To Joria’s surprise — she’d given birth a few months earlier — the costume still fit. “I put it on and I decided people need to see this,” she said during a recent Between Two Pulpits Facebook Live broadcast hosted by Bryce Wiebe and Lauren Rogers of Special Offerings. “If I’m going to put it on the internet,” having done exactly that, “we should get something out of this,” Joria reasoned.

Her St. Patrick’s Day online plea came with a promise to don her costume — complete with the wig — and dance a jig if the congregation gave $100 to One Great Hour of Sharing by the end of the day. For $500, she’d get the church’s senior pastor, the Rev. Josh Erickson, to dance a jig too, once she taught him how.

“He’s a great sport,” Joria told Wiebe and Rogers. “We raised well over $500 for One Great Hour of Sharing. It was the most online traffic we had ever done. It was proof that it could work even when we are separated.”

“That,” Wiebe responded, “is why I like talking with leaders who work with young people.” Since 2018, Joria has been Park Ridge Presbyterian Church’s associate pastor for children, youth, missions and outreach ministries.

Joria said it’s been social media that has allowed the church to connect with Park Ridge residents around generosity outside the church community. “They may not care about our worship services or our community life, but there is a longing for people to connect around serving, and it’s contagious,” she said. “Being part of a faith community is not important to everybody, but responding to hunger is.”

Lessons about kindness “just make sense to young people,” she said. “If we can make generosity make sense to them early on, the next generation will be unstoppable.”

The church has a gumball machine and gives away the quarters spent on gum. “Having fun and a gimmick is not a bad thing when you are trying to cultivate generosity,” Joria said. “You can put on a wig and dance and that’s OK, too.”

Wiebe suggested the church take the gumball ministry a step further during an upcoming children’s time: give each child two quarters to have a gumball and a quarter left over. Call it “something to chew on,” suggested Wiebe, the former Special Offerings director.

“I may steal that idea,” Joria said.

If she were to preach on this week’s lectionary, Joria would focus on James 3:1–12, especially verse 8: “but no one can tame the tongue — a restless evil, full of deadly poison.”

“We’ve got to try to control our tongues or our tongues will control us,” Joria said. “Words can have powerful impact. Kids can say really kind things out of nowhere, but we forget how to if we don’t practice it often.”

Joria said she sat down recently with some of the church’s high school seniors to record a podcast. It proved to be a great opportunity to talk about mental health, “which came up quite a bit,” Joria said. Later via Instagram she found herself telling the story of her friend in the eighth grade who died by suicide.

“Why don’t I tell that story much anymore? The ways kids express themselves on social media now gives us a lot of opportunity to see what they were struggling with behind the scenes,” Joria said. “I wanted them to be sure to see a word on Instagram that they are not alone.”

Lord, bless us with renewal. We pray our community would be blessed with one mind and spirit in feeding your flock. By your Holy Spirit, inspire and enable foolish moves leading to the flourishing you have promised. Jesus, you call us to feed, by the power of your Holy Spirit. May we answer. Amen.