‘Art has a way of flourishing in the midst of crisis’ 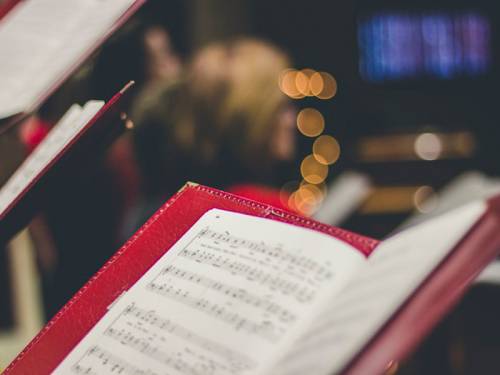 Photo by David Beale via Unsplash

Three Presbyterian hymn-writers shared their sources of inspiration and some of their favorite hymns during a recent webinar called “When in Our Music God is Glorified,” put on by the Presbyterian Writers Guild. About three dozen people attended. Dr. Anita Coleman, a writer and former professor who’s vice president of the guild, moderated the webinar.

Asked to reveal his sources for inspiration, the Rev. Dr. David Gambrell, associate for Worship with the Office of Theology & Worship and a hymn-writer and musician, said he’s “contractually obligated” to say it’s the Holy Spirit, “and I mean that quite sincerely. The best ideas I have feel like a gift.”

Of course, there’s plenty of work involved crafting and honing an idea for a hymn, “but that work too is empowered by the Spirit,” said Gambrell, adding he studies Scripture — especially the psalms — before writing a hymn.

“It’s like how jazz musicians learn the standards,” Gambrell said. “You immerse yourself in prayers and songs to develop the chops to play and improvise your own thing.”

“The Spirit needs a medium to work through,” said Dr. Mary Louise (Mel) Bringle, a hymn-writer who chaired the Glory to God hymnal committee that also included Gambrell, “and the majority of the time the Spirit speaks to me through music.”

Before writing new lyrics, “I have to have a tune in my ears first. I prefer one that hasn’t been texted,” Bringle said. She’s found a number of composers willing to come up with a new tune, “and then I play it until the words start to emerge.”

The Rev. Chris Shelton, the pastor of Broadway Presbyterian Church in New York City and the author of a new hymnal called “Sing No Empty Alleluias,” said it’s the task of a pastor who’s also a hymn-writer to “try to create moments for people to find and hear themselves in ways I have been privileged to do” by “writing out of that wonderful soup of experience, trying to give voice to these moments.”

Bringle said she started writing hymns unintentionally, writing parodies of hymns that her students enjoyed and started singing. Nearly 25 years ago, a student asked Bringle to write a legitimate hymn for his upcoming wedding. Like Gambrell, Bringle began to write a hymn each week as a spiritual discipline.

“I was pretty verbose in my early texts,” Bringle said. “I try to write bite-sized memorable refrains now.”

Gambrell and Bringle both touted The Hymn Society, which has as its mission “to encourage, promote and enliven congregational singing both in the United States and Canada. “It’s where I met the composers I work with,” Bringle said. “They are all down to earth and will workshop your texts and share their tunes with you.”

“These are people who know and love hymns and can sing them in many types of traditions,” Gambrell said. “Collaboration is a gift. It’s such a joy to see your words take on new life and have new and different meaning through someone else’s musical interpretation.”

“Liturgy and hymnody should be about building relationships, with God and neighbors and people beyond the church,” Gambrell said. “Hymn-writing can be a way to build those relationships by making a common song for the people of God.”

It’s those harmonies that many Presbyterians have missed during the pandemic, Gambrell said, adding, “We sing with different voices that bring different gifts and life experiences.”

Worship leaders do well to “engage the depth that’s already there,” Shelton said.

“I often am caught up in trying to craft a moment,” Shelton said. His solution was to “flip pages [of the hymnal] until I see the right sound on the page.” If that doesn’t work, “find a musician and sing your hymnal.” It can also be helpful to host a hymn sing at home or in the church parlor, Shelton said.

“Singing in church has become a dangerous activity,” Coleman noted. “But it has spurred innovation. People have used techniques to produce performances when they were physically separated.”

The pandemic “has spurred wonderful writing as well,” Shelton said. The Spirit “has moved between the walls that divide us. … Art has a way of flourishing in the midst of crisis.”