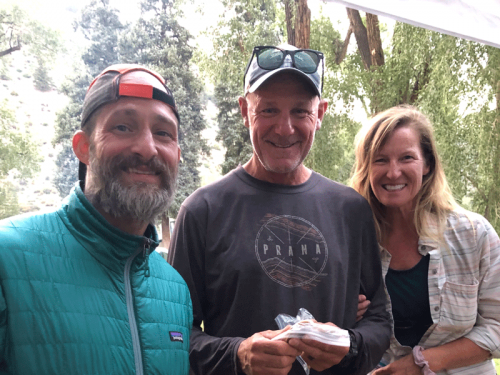 From left to right are hikers Marco Santarsiere and Don and Heather Berneir. (Photo by Paul Seebeck)

One month after the Rev. Dr. Jason Brian Santos became pastor of Community Presbyterian Church in Lake City, Colorado, the small mountain town of 400 officially became a “gateway” trail town for hikers on the Continental Divide. It was already well known as one of the better towns to stop for those hiking the Colorado Trail, which runs from Denver to Durango.

Months before the thru-hiking season began, Santos began pondering how his congregation might minister to trail hikers. Earlier in his career, as an associate pastor in New Wilmington, Pennsylvania, he partnered with the Presbyterian church in Duncannon, Pennsylvania, a town on the Appalachian Trail. For two years, he and his youth group refurbished the historic hiker center that sits adjacent to the church. Through that effort, Santos became more aware of the needs of thru-hikers.

So, when Lake City became an official gateway trail community, Santos had an idea about how the small church he served might service these weary travelers: by providing them with a free Sunday night hiker meal — and genuine hospitality — in the busy summer months of July and August.

At first, people at the church were a little uncertain, but by springtime the church session approved the hiker ministry. And at the next community pastoral meeting with the Baptist, Episcopalian, Catholic and nondenominational churches in Lake City, Santos invited them to join in the trail hiker meal.

Each church took turns hosting meals at Community Presbyterian Church and helping with the shuttle to Spring Creek Pass on Sunday to pick up hikers coming for the meal. During the eight weeks, the churches served some 200 hikers and provided refuge to more than 20 who couldn’t find accommodations in town.

Word on the Colorado Trail quickly spread about the hospitality Lake City was offering via testimonies on the Guthook app, in Facebook posts and through word of mouth. Hikers Marco Santarsiere, Dodge Aistad, Anna Howell and Eric Sallenberger came to Lake City on the last Friday in August. “We all agreed we had to stay for the final meal,” Santarsiere said. “It’s been wonderful. You make lifelong friends on the trail and now here in Lake City.”

Based what they’d heard, Howell and Sallenberger also felt like they couldn’t pass up the meal. People on the trail kept telling them that they had to come to Lake City, a place where people were kind and helpful to hikers. Howell said seeing people helping, for no reason except to provide her and other hikers with a meal, restores one’s faith in humanity. Added Sallenberger: “It was so nice. We now call them trail magicians,” a tip of the hat to the phrase “trail magic,” which refers to unique acts of kindness hikers encounter on their journeys.

Jim Ferguson, a member of First Baptist Church in Lake City, has been to every meal. “Seeing church people accept others for who they are has restored my faith,” he said. “Our communities of faith are working together planting seeds.” For one retired summertime resident, Presbyterian Donna Lowry, the hiker meals, which she refers to as “Sunday night socials,” have been not only been good for the hikers, “but also for us,” she said, “just to love on people.”

Hiker meals throughout the summer had themes, including German, Mexican, Italian fests — along with an all-American meal with hot dogs, and both a ham dinner and a ham brunch.

The final meal, prepared by Santos, was Greek night. With homemade pitas, shaved gyro meat and a dollop of tzatziki, the meal participants feasted on Mediterranean fare.

For Santos, who previously was director of Christian Formation for Presbyterian Mission Agency, the best thing about providing meals for hikers is that faith communities joined together for the common purpose of mission and ministry. It’s been a thrill for him to see how it’s taken off.

“In the middle of the week, people are telling me they’ve picked up a hiker and taken them to the pass,” he said. “Like they’ve done something really good. It’s rewarding, good to see and hear. It’s what the hikers call ‘trail magic’ — holy moments that are heart of humanity.”

Redeeming and restoring God, we give thanks for the varied ministries of the church. Help us to make good use of the skills and talents as we share in the building and rebuilding of Christ’s church. Amen.