Congregational vitality moves Georgia congregation to embody love for all

Thanks to Matthew 25, Light of Hope congregation in Marietta becomes a people of action 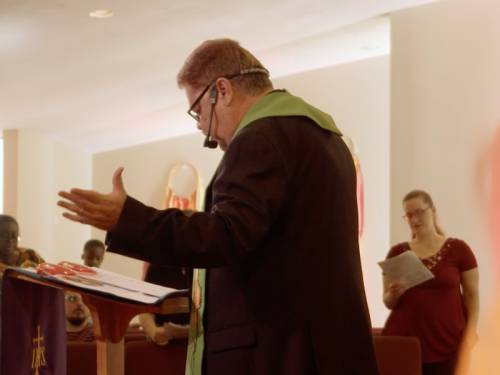 Edwin Gonzalez-Gertz describes the congregational vitality focus in the Matthew 25 vision as “the embodiment of love — faith in action.” (Photo by Mike Fitzer/Film 180)

Before it became Light of Hope, three older, white congregations were in decline. Realizing they needed to make a radical change, all three churches in Cherokee Presbytery closed. Dissolving their congregations, they started something new together, a worshiping community — and now PC(USA) chartered congregation — that is 50% people of color and 50% white.

But when people from the community, which is 60% people of color, started coming to Light of Hope, their focus was on race, because there wasn’t much acceptance of each other. Gonzalez-Gertz said many of the older members in the new faith community were embarrassed to have a Hispanic pastor. A native of Puerto Rico, he was told on several occasions that he was not invited to funerals of those who had passed, even though they were members of the congregation.

So, Gonzalez-Gertz began to talk about racism. If he perceived there was a struggles in the church related to him being Hispanic, it became part of the conversation on Light of Hope’s leadership team. It was there that he discovered the practice of white silence — that many white people will not speak when they see injustice being done to somebody who doesn’t look like them.

“I experienced it here walking through our campus,” he said. “I asked one of the wonderful matriarchs here, ‘What is that?” After she told him, they had a conversation. The woman said growing up that they were taught not say anything, as a way of being polite. When Gonzalez-Gertz asked her, “Polite to whom?” he said it was as if a whole new insight came to her, and something fell off her eyes. “Oh my gosh,” she said.

In addition to having these kind of conversations, Gonzalez-Gertz brought in resources of understanding to help build cross-cultural, multi-cultural, and intercultural relationships. And he kept telling Light of Hope that the minute they became a multi- ethnic congregation, everyone lost the right not to find out about each other’s lives.

“Why is my Black sister worried about Black Lives Matter? Why are Hispanics afraid to go into public now?” he said.

Pam Jones was a member of the Pastor Nominating Committee that called Gonzalez-Gertz to serve the new congregation inShe said Light of Hope made her realize a lot of things about herself that she didn’t know existed.

But as leaders of the congregation continued to meet and talk through difficulties — and as Light of Hope grew into a multi-ethnic congregation — Jones realized she couldn’t say that anymore.

“Things I had absorbed, you know just absorbed, were racist,” she said. “It’s amazing to me, about me, the difference that has made in my attitude towards a lot of things.”

Over time, Shirley Hamilton, who is a ruling elder at Light of Hope, said the church has become one of a few churches — if not the only one she’s attended — that doesn’t care whether a person is Black, white, or brown.

“It doesn’t matter whether you have money or don’t have money,” she said. “It treats everyone the same.”

Last year, Light of Hope started hosting a monthly meal for its community.

At first there was no preaching or singing—just praying for the food. When leaders decided to transform it into a dinner service, Gonzalez-Gertz said the people loved it. Diverse racially and economically — able-bodied and those experiencing disability — attendees were all were eating, singing and having communion together.

“What vibrancy, what vitality is that, but the body of Christ in action,” he said. “Congregational vitality and Matthew 25 moves people to action. It is no longer what we believe, but this is who we are. This is what we do.”

Lord Jesus, thank you for calling us and giving us the strength to respond, not only with words, which fade, but with our lives. We are grateful that you allow us to be your hands and witness in our communities and throughout the world. Help us to hear your voice for the changes you want us to make. Amen.