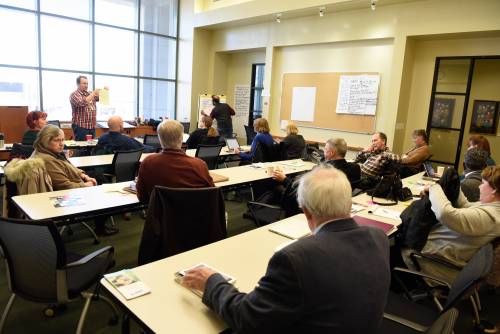 A committee charged with forming networks within the Presbyterian Church (U.S.A.) to work with mental health issues held its first meetings at the Presbyterian Center in Louisville, Kentucky on Feb. 12-13. (Photo by Rich Copley)

LOUISVILLE — When Doug Beach’s son suffered a mental breakdown on an overseas trip, he didn’t know what to do.

“We could have used a lot more help,” Beach said, recalling the event.

His church was supportive, but staff and clergy weren’t familiar with the resources available to help people with mental health issues and their loved ones. Last week, Beach was part of a Presbyterian Church (U.S.A.) initiative working to change that. 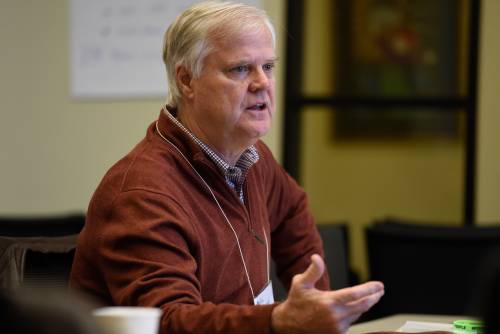 Doug Beach speaks to a committee charged with forming networks within the Presbyterian Church (U.S.A.) to work with mental health issues. (Photo by Rich Copley)

On Feb. 12-13, more than 20 people with varying experiences with mental health and the church met at the Presbyterian Center in Louisville to begin work on an effort that began last summer when two Presbyterian churches in Texas brought an overture to the 223rd General Assembly in St. Louis to implement and potentially update “Comfort My People: A Policy Statement on Serious Mental Illness,” which had been approved at the 218th General Assembly in 2008.

“It was someone from the pews who came to me and said, ‘I need help,’” Rev. Josh Robinson of Hope Presbyterian Church in Austin, Texas said. “’I’ve got this document called the “Comfort My People” policy statement, and it has gone nowhere. It has good, robust items of action for us to embrace and to do, but I see no evidence that it’s been deployed within our denomination or our church congregation.’ 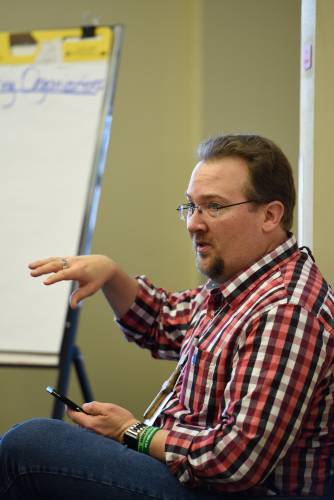 The Rev. Josh Robinson speaks to a committee charged with forming networks within the Presbyterian Church (U.S.A.) to work with mental health issues. (Photo by Rich Copley)

“Having read it, having studied it, I said, ‘This is a great document. We can do these things. We don’t need congressional approval. There are things here we can do.’ So we started doing it, and two years later, after we had gotten started on our mental health ministry, I got somewhat frustrated and said, ‘I don’t know that it’s going to make a big difference in the grand scheme of things in the life of the denomination.’ And I said, ‘Well, let’s write an overture. Let’s get the denomination to get re-excited about this.’”

Hope was joined by Covenant Presbyterian Church in San Antonio in bringing the overture to the General Assembly, where 20 presbyteries concurred. It was passed and included $250,000 for grants.

The group that met for the first time last week began work on four major goals, according to notes by group member Jason Whitehead:

“It’s one of the most important things PC(USA) can do because it speaks to all of us, whether we’re in the pews or the pulpit,” Beach said. “It speaks to our families, our communities, and I think we’re called to reach out and comfort people and help support them, and we need to do more of that.

“This is a big call to action.”

For Sara Lisherness, director the Compassion, Peace & Justice ministries of the Presbyterian Mission Agency, the effort has been initiated exactly as it should: from congregations, and is focused as it should be, to equip congregations, pastors, mid-councils and seminaries as they respond compassionately to people with mental health issues in their communities.

Because mental health resources and policies vary widely between states and regions, Lisherness says it is particularly important that tackling the issue is a grassroots effort led by people with expertise in their communities.

“The folks gathered here are a force and an organization within themselves,” Lisherness said of the group working at the Presbyterian Center. “We have come together to set a common vision, then to walk alongside these leaders as they make connections and build a network across the church.”

To Lisherness, this is a good time to revisit “Comfort My People,” as perspectives on mental health and issues have emerged and evolved in the last decade. Mental health, she points out, is an intersectional issue that touches many ministries in Compassion, Peace and Justice, crossing paths with societal concerns such as poverty and homelessness, post-traumatic stress syndrome resulting from war, other forms of violence, natural and human caused disasters, and suicide resulting from easy access to guns. 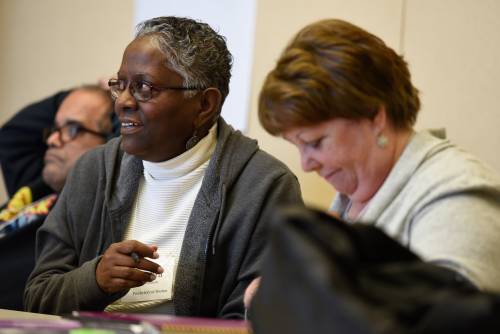 Debra Johnson of Roxbury, Mass., at left, suffered grief and trauma in 2010 when her son was murdered. She’s now helping others deal with trauma. (Photo by Rich Copley)

Debra Johnson of Roxbury, Mass. experienced her own trauma when her son was murdered in 2010. She is now part of helping others deal with trauma at the Cory Johnson Program for Post-Traumatic Healing, based at the Roxbury Presbyterian Church Social Impact Center.

At the center of the program is “Can We Talk?,” Thursday night sessions featuring dinner, childcare and an open forum where people recovering from trauma can tell their stories.

“I myself have a story, and I have found that telling it has helped me a whole lot,” Johnson said. “When I started the program, I was still in a dark place, and as time moves on, I could see a little shift. There’s light filtering in.”

Colleen Sharka, a licensed mental health counselor and director of the Johnson program, says the effort extends beyond the sessions, helping people seeking services and trying to cope in other ways. She and Johnson were invited to be part of the group to share their experiences and learn from others.

“We’re sort of doing what they’re talking about here,” Sharka says. “We found a way — it’s one way, not the only way — for people to come to the doors of the church from the community at large.

“I hope we can be a resource to what’s happening here as well as part of the network.” 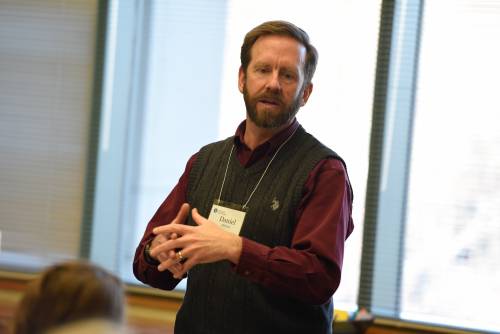 The Rev. Dan Milford, pastor of Covenant Presbyterian Church in San Antonio, said that while it can be difficult, the job of the church is to “run into the chaos.” (Photo by Rich Copley)

The group engaged in brainstorming sessions as well as discussion of issues such as suicide awareness. Dan Milford, pastor of Covenant Presbyterian Church in San Antonio, said suicide impacted his congregation when a 15-year-old boy took his own life. Two years later the father died by suicide.

While it’s a painful to deal with, Milford said, “That’s the job of the church of Jesus Christ: To run into the chaos.”

The group received an exhortation from the Rev. Dr. Diane Moffett, president and executive director of the Presbyterian Mission Agency, who told participants the work they were doing is right in line with the denomination’s focus on being a Matthew 25 church, based on Christ’s command to care for “the least of these.”

She said that after 32 years as a pastor she knows that mental illness is an issue churches are faced with all the time, “because of all the craziness in the world and systems we have set up. … We make living hard.

“We are a Matthew 25 people, actively engaging in the world,” Moffett said. “You are blessed, you are blessing.” 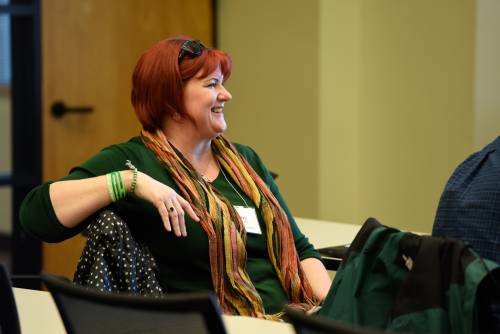 Participation in the group was not limited to the Presbyterian Church. Rev. Amy Petré Hill, Minister of Mental Health and Inclusion Ministries at Mountain View United Church in Aurora, Colo., was ordained in the United Church of Christ. That denomination has already done work building mental health networks under the WISE church initiative, meaning Welcoming, Inclusive, Supportive and Engaged for Mental Health.

“All denominations should be supporting each other and sharing best practices,” said Hill, who was a disability rights attorney before going into ministry. “There should not be any silos, because we want everyone’s mental health inclusion to thrive.”

She said she was there to share with the group what the United Church of Christ has done and to learn from the PC(USA) ideas.