Farsijana periodically travels to the U.S. and is available to visit congregations. Email her to extend an invitation to visit your congregation or organization.

Farsijana teaches in the Master of Management in Social Entrepreneurship program at Duta Wacana Christian University in Yogyakarta, Indonesia, where she also works with the Center for Development and Social Transformation in the Faculty of Business.

She is the founder and director of the House of Authentic Sense (HAS), a community-based cooperative comprised of village entrepreneurs from throughout the province of Yogyakarta. As a grassroots organization that practices principles of economic justice, the HAS Co-op is a place where community members help each other build businesses and save money. It brings together Muslims, Christians and people of diverse economic and educational backgrounds to collaborate in grassroots poverty elimination and advocacy for a just and peaceful society. Through the co-op, community members learn skills and build businesses around food processing, batik making, goat milk processing, organic tea cultivation and more. Such microenterprises or cottage industries are important in Indonesia, as they are worldwide. Particularly in smaller villages with limited opportunities for steady employment, microenterprises provide women and men with livelihoods. Especially for women, who often shoulder more childcare responsibilities than men, having the flexibility to work around other responsibilities is vital.

In the late 1990s, Farsijana and her husband, Bernie — a Presbyterian Church (U.S.A.) mission co-worker who retired in March 2019 — built a home called Pondok Tali Rasa in an all-Muslim neighborhood that serves as a center for community outreach and hospitality. At any given time, they share it with several other people of both Muslim and Christian faith. Their house has also served as a center for an organization that Farsijana led, the Indonesian Women’s Coalition (KPI), which empowers women and serves the victims of natural disasters.

The Republic of Indonesia was formed in 1945, when it claimed its independence from the rule of the Dutch. Indonesia’s population consists of many people groups who live on the 6,000 inhabited islands across the archipelago. Indonesia is home to the world’s largest religious Muslim population, and adherents to Islam comprise about 85% of the population. Christianity, the faith of about 10% of the people, came to Indonesia in the early 16th century with the arrival of Westerners. The PC(USA) began its involvement in Indonesia in the 20th century and continues to serve with partners in theological education, interfaith relations and disaster assistance.

As Farsijana grew up in Indonesia, she is at home with the people and culture she serves.

Shortly after graduating from seminary at the age of 22, she began teaching in the remote area of North Moluccas, Indonesia, at the Theological Seminary of the Evangelical Christian Church in North Moluccas (GMIH). During this time, she also worked with farmers and women in North Moluccas, striving to empower them to advocate for social justice and peace.

In 2005, Farsijana received her Ph.D. in anthropology and Indonesian studies from Nijmegen University in the Netherlands. Farsijana also holds a Master of Arts in religion and society from Satya Wacana Christian University (UKSW) in Salatiga, Indonesia, and a bachelor’s degree in theology from the Theological Seminary, Jakarta (STT Jakarta). Her multidisciplinary academic training that spans philosophy, economics, religion, sociology, women’s studies and conflict resolution enhances her ability to participate in God’s mission in Indonesia. Farsijana explains that “building human resources according to the image of God requires cultural analysis and sensitivity, knowledge of macrodevelopment and microdevelopment, and the implementation of best practices in community development.” In modeling and training communities and students in collaborative self and community empowerment, Farsijana strives to weave faith into Indonesians’ everyday lives.

Farsijana and her husband, Bernie, are members of First Presbyterian Church of Berkeley in California and of the Christian Church of Java (GKJ) in Yogyakarta, Java. They have three adult children, Jennifer Marion, Rina and Peter. 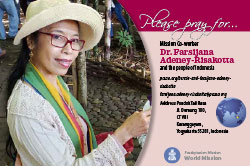