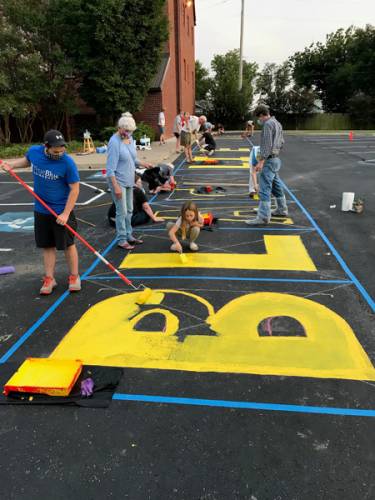 When the City Council of Tulsa, Oklahoma, voted last month to remove a Black Lives Matter mural from the city’s Greenwood District, the site of the infamous 1921 Race Massacre, the session at College Hill Presbyterian Church and the church’s pastor, the Rev. Todd Freeman, knew what had to be done.

They would paint the mural, “Black Lives Matter,” in striking yellow paint, on the church’s parking lot.

“It was a unanimous decision without much discussion,” Freeman said of the September session meeting. “I tried to bring up the negatives, including possible vandalism, and they just said, ‘This is who College Hill is and we can’t not do it.’”

“It always takes courage to not be silent, to take a stand and then be willing to deal with whatever comes from that,” Freeman said. “We’re coming up on 100 years since the Race Massacre. The whole BLM movement has taken on extra intensity here in Tulsa.”

If the action by College Hill Presbyterian Church and the other churches says anything, it’s that “it makes us recognize that it is the white community that needs to do the work of challenging the status quo,” Freeman said. “We are responsible not only for being an ally, but for doing our own internal work as individuals and white congregations that have been silent and fairly complicit over the decades. We are trying to make amends for that.”

“It’s not enough to be non-racist,” Freeman said. “We must be actively antiracist.”

College Hill Presbyterian Church has a long history of members putting their faith into action. During World War II, the church housed Japanese-American students who otherwise would have been forced into internment camps. During the Vietnam War, the church sheltered a Vietnamese family. In a twist of social justice, the houses that were used to accommodate those people being protected were torn down years ago. That plot of land is now the parking lot where the Black Lives Matter mural was painted.

On the day last week following a press conference featuring pastors of churches sporting the new murals, Freeman received two telephone calls. The first was from an elderly Black man “who was very moved when he saw that on the news. He told me, ‘I just need to call that pastor tomorrow.’ He is a lifelong Tulsan, and we had a wonderful visit. He said it surprised him to know a white church would do this.”

An hour later, an elderly white man called Freeman to make sure the pastor had read the Black Lives Matter webpage. They are an anti-American and communist organization, the man told Freeman. “I challenged him in a nice way,” Freeman said. “I said, ‘I doubt they’d say they are un-American.’”

“Well, they are against freedom and liberty,” the man replied. The two went back and forth for a few minutes. Finally, the caller told Freeman, “I can see I am getting nowhere with you,” and hung up on the pastor.

But overall, the response has been overwhelmingly positive. Freeman’s post garnered more than 300 “Likes” on the Happy to be a Presbyterian Facebook page. And among College Hill Presbyterian Church parishioners?

“They are nothing but grateful we have found a way to take another strong stand for racial equity,” Freeman said. “I’ve been preaching on this since the George Floyd murder and tying Black Lives Matter into sermons. We have a long way to go to understand issues like white privilege and white fragility. We’re just starting the work.”

“We’re becoming more aware of the impact of our words and actions,” Freeman said. “Even if the intentions are good, we can still do harm.”

Gracious God, give us strength and courage to follow your call. Even though our numbers are small, grant us that our fruit be plentiful and our blessings great. Amen.