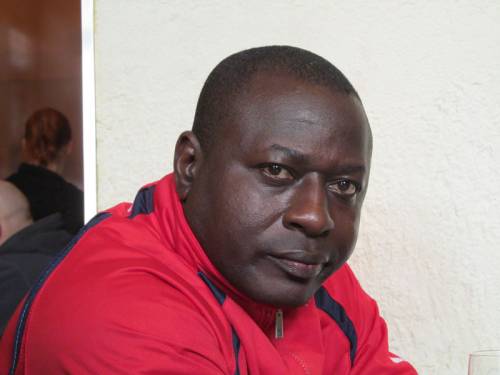 Imagine learning your family member’s home was burned down by the army, or that your brother-in-law was brutally murdered by soldiers in your hometown.

It seems an impossibility, even a ridiculous notion, to those of us living in the U.S. But since 2016 that has been the reality for families and communities in Cameroon — violent acts committed by the very military members who should instead be protecting them.

“Civilized people cannot afford to remain indifferent to the unfolding silent humanitarian disaster in Cameroon,” said Jaff Bamenjo, coordinator of the Network for the Fight Against Hunger in Cameroon (RELUFA) and an International Peacemaker sponsored by the Presbyterian Peacemaking Program and World Mission.

It was Bamenjo’s aunt who, in April 2019, lost her home when the military set fire to it. It was his sister’s husband who was killed “not because he committed any crime, but simply because in a war zone everyone is a target,” Bamenjo said.

But even as he grieves for those lost and worries daily for the safety of his family, Bamenjo continues more than a decade of work to help others who are suffering. In 2005, RELUFA identified recurring hunger problems in the poor and densely populated northern region of the country.

“RELUFA worked with communities to understand what kind of intervention will respond to communities’ needs, avoid creating dependence and will be sustainable,” he said. “Communities involved in the initial program proposed a system that will make food available in the community at all times and that will not distribute but provide foods to grain bank members to reimburse during their next harvest. ”Creating these banks helped people in these communities avoid paying high prices for food during lean times and ensured that food was available year-round. But as RELUFA was addressing the root causes of hunger in Cameroon, a new danger was growing.

The English-speaking minority in Cameroon were feeling marginalized in a mostly French-speaking country. In 2016, response to growing inequities, lawyers and teachers organized peaceful protests. The government responded violently, and that escalated into war.

“These acts of barbarity and inhumanity violate the sacredness of human life and are sacrilegious to the worship of God,” wrote one member of the Presbyterian Church of Cameroon.

Amidst this chaos and violence, RELUFA continues to work to help the most vulnerable populations.

“RELUFA has developed a scheme to seek funds and help the people affected by the conflict in the northwest and southwest regions of Cameroon,” explained Bamenjo. “Addressing the root causes of hunger is always better than focusing on the symptoms. Solving problems at an early stage is always better than running behind to resolve conflicts.”

The Presbyterian Hunger Program has developed strong partnerships with RELUFA. Your support of the Peace & Global Witness Offering enables the Peacemaking Program to host the International Peacemaker program so peacemakers like Bamenjo can share with congregations about the challenges some of sisters and brothers face.

“As an individual, I feel helpless, but I know I have strength because of the many people in the world who do care,” said Bamenjo. “It is unacceptable to stay quiet, stand by and watch the slaughtering of innocent people who only demand their rights and accountability. Let us contribute in any way possible to make sure peace returns to Cameroon.”

God of mercy and justice, we thank you for the fire that purifies and the Spirit that sustains. Bless our modest efforts to speak in your name. Amen.