Are we really all on the same boat?

Or are some in Noah’s Ark and others on the Titanic? 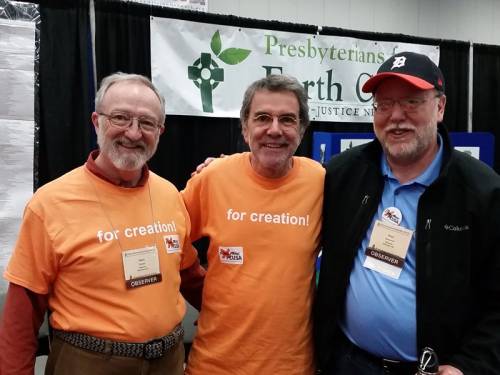 Another hot and dry summer last year caused many heat-related issues and stresses for farmers in Central Europe. Plants had to be watered around the clock, just to keep them alive.

Thirty years ago, I remember we had to clean smashed insects from our car windshield practically every other day. Now we hardly have to do it at all because our insects are fewer in number, and even our bees are in danger.

People everywhere are talking about climate change and a silent war against nature. It’s a necessity to talk about trees and bees, since they disappear as a signal of our complex wrongdoings as citizens of planet Earth:

More and more people understand that the justice, peace and integrity of God’s Creation form a triad. Justice needs peace and peace needs justice. A fair and humble use of natural resources is an important element of justice and thus a precondition for peace. A destruction or poisoning of or robbery of nature causes people to leave their homeland and limits our fairness to future generations.

Looking at 17-year-old Greta Thunberg, who started the movement of students in Sweden, I think these are fragile shoulders to carry the whole world. It’s like when we delegated pacifism to 18-year-old conscientious objectors, while others hid. But this movement is growing. Youth in Europe have learned that their future is at stake. Students participate in “Fridays for Future,” a campaign against fossil fuel. Communities are protecting their bees by spreading the word that “Cutting your lawn short should be embarrassing,” and that people should plant flowers instead of maintaining carefully manicured lawns. Their slogan is “Wir sind hier, wir sind laut, weil ihr uns die Zukunft klaut,” which translates to “We are here, we are loud, because you steal our future.” This makes me sad.

In June, I attended Kirchentag, a large Protestant-German lay assembly in Dortmund in northern Germany. Together with tens of thousands of other attendees, I sang about God’s beautiful Creation, discussed our ecological sins and, most importantly, encouraged others. I was also encouraged in the ongoing work of caring for Creation.

Europe is divided over the issue of migration and doesn’t have a strategy. At the 2019 Kirchentag, we had opportunities to hear the voices of refugees and others who witness the suffering of refugees. We commemorated the thousands who have died in the Mediterranean and protested against criminalizing their helpers. (The former Italian interior minister didn’t even allow rescue boats to enter Italian harbors.)

I was part of a group carrying long banners made by participants in the Kirchentag, listing the names of thousands of people who drowned. We hung the banners from one of the tallest church steeples in Dortmund.

The populist neo-nationalist political party Alternative for Germany sees all this very differently. Many of my fellow church members and I were shocked to see them doubling their share of the vote in the recent elections (to now 23%). In my very secular state of Brandenburg, this party, which is led by a former neo-Nazi, sees my denomination (the Protestant Church in Germany) as part of a left-wing and ecological conspiracy. For the members of this neo-nationalist party, climate justice and support for refugees are misleading ideologies.

They say the church has lost God and only follows the current societal mainstream. However, in truth, they themselves are actually seeking to replace God with the idol of nationalism. That’s something that’s been tried before in German history, with terrible results.

There is a diversity in the streets that inspires me; from high schoolers to doctors; scientists to faith leaders; union members and everyone else demanding action on climate change from our country’s leaders.

I believe that right now Christians on both sides of the Atlantic need each other very much.

God of all Creation, please let us remember the verse of Gen. 2:15: “God placed humankind in the Garden of Eden to cultivate it and guard it.” Amen.