Matthew 25 church is an oasis in a food desert 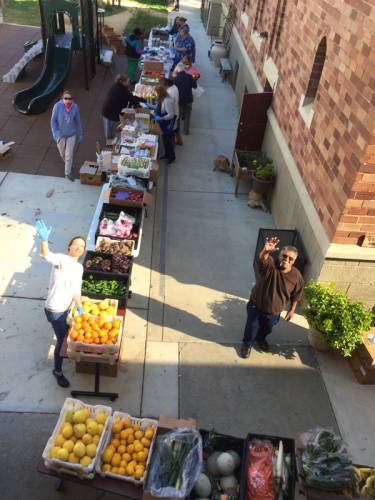 After worship, the congregation set up a bounty of organic produce and other healthy staples on banquet tables and encouraged those in the community to mingle and connect with them. The event known as “The Sunday Table” would gather people around the “table,” encouraging all to join in singing hymns, like “Amazing Grace,” in English and Spanish. There was also a time of prayer, and The Sunday Table quickly became more than just a time to disseminate food. McIntosh-Smith and Durst say it became a celebration of “authentic connection and community.”

The Sunday Table has also given church members and friends the opportunity to share and cultivate their unique gifts and talents. A congregant started offering classes on cooking and canning to the church members and the larger community. There are also plans for an avid gardener in the congregation to start a church garden.

While the congregation might be small in numbers, its vision for the future is big. The church hopes one day to serve as a contextual education site for a minister or seminarian interested in learning more about the relationship between food insecurity, social justice, farming and faith.

Currently, Countryside Community’s multigenerational and economically diverse congregation is mostly white, but The Sunday Table seems to be shifting the church’s racial and ethnic makeup, McIntosh-Smith says. The pastor has also seen congregational vitality increase as new faces join the mission of loving others. McIntosh- Smith says that some of The Sunday Table’s most devoted volunteers first came to Countryside Community to receive food for their families. Now they have become the ministry’s biggest supporters.

Dear Lord, thank you that no matter who we are, you love us. Thank you for your presence with us today. Amen.