Rev. Dr. James Forbes speaks on ‘COVID-19: A Parable of Plagues before Deliverance’ during lecture series 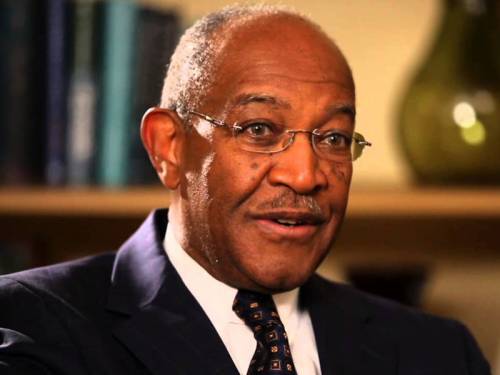 In a lecture series sponsored by Union Presbyterian Seminary and the Center for Social Justice and Reconciliation, the Rev. Dr. James Forbes spoke on “COVID-19: A Parable of Plagues before Deliverance.” Forbes, considered to be among the most significant prophetic voices in our nation, is pastor emeritus of The Riverside Church and professor emeritus at Union Theological Seminary in New York, and has for decades helped frame the nation’s theological sense of justice.

Forbes opened his remarks by stating, “I hope what we start to say tonight will cause us to think clearly about what we are going to do in these challenging days of the COVID-19 virus and the many other challenges we face.”

Forbes said that about this time last year, he was led almost as if by the Spirit to read a passage from the Book of Genesis. “This is a passage that I am sure I have read many, many times,” Forbes said. “But I had never noticed what I’m now calling the first biblical quadricentennial.”

Reading from Genesis 15:12–14, Forbes focused on the part of the Scripture that reads: “And they shall be oppressed for four hundred years; but I will bring judgment on the nation that they served, and afterward they shall come out with great possessions.”

Forbes said he sometimes talks to the Scripture. “So, I said to the Lord, ‘Lord, I want to know something. We Black people having been in slavery, emancipated, but then still held in bondage for reconstruction, Jim Crow,’” he said. “And now, continuing forms of oppression and globalization has been 400 years, Lord. But I want to know you love us Black people, as you loved the Israelites in bondage in Egypt. Now I think I heard the Lord say, ‘Yes, I love Black people; I love white people, in fact. I love all my people. And I intend to do something dramatic towards the deliverance of all of the people who are my children created in my image.’

“So, I was excited about that,” Forbes said. “God, during our quadricentennial, is going to do something dramatic about difference, not just with Black people, but he says, bondage is always binary.

“But I remember something else the Lord told me now: ‘Listen, just as I brought deliverance in ancient Egypt, remember there were plagues associated with that, and there will be plagues this time.’ I started looking for the mighty hand of God at work to bring those who were in bondage to a promised land of freedom and justice.”

Forbes said 2020 hit us with the COVID-19 pandemic. “Is this a plague that’s going to be a parable to this nation? And if it is a plague, that’s a parable to the nation, is it a plague that will eventually rate into a moment or a season of deliverance?” Thinking he should revisit the Scripture addressing the plagues of the Bible and COVID-19, Forbes referred to the seventh chapter of Exodus: “The plagues, you remember them, don’t you, water through the blood, frogs all over the place, flies, livestock disease, boils, locusts, darkness, gross darkness,” he said. “It is as if sometimes, when oppression has lasted so long and people have grown so accustomed to brutalization of God’s children, that it appears that even God is going to do something. God has to demonstrate that you are not likely OK to let the people go. You’ve just gotten so accustomed to that it’s just so natural,” Forbes said. “It just feels almost like righteous response to the mandate of God. So that phrase, the hardening of Pharaoh’s heart, suggests that God says, ‘I’m going to fix it. So even when you want to do right, you can’t; I’m going to fix it so that whatever happens, it will be clear that it was the outstretched hand of God that made you do it.’”

Forbes said that God says prolonged oppression requires an action of the divine that even human beings don’t have to consent to. “Seems like a voice said, ‘Yes, there may be more plagues, but you are already beginning to see that change is possible.’ There are harbingers of hope,” he said.

Today’s Focus:  A Parable of Plagues before Deliverance’

Loving God, you soak us in your radiant love, enabling us to exude that love to your world. We pray that as we run the race of faith, you would strengthen us in endurance, that we might serve those we encounter along the way. We thank you for your extravagant grace. Amen.