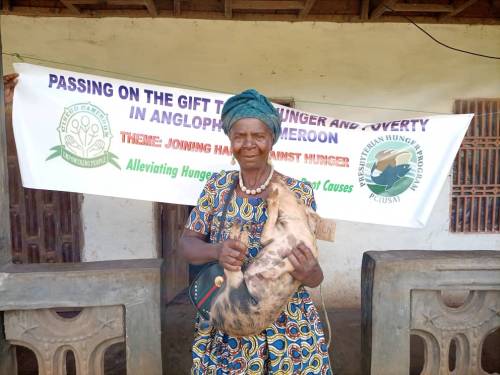 A woman poses with the pig she received.

Agriculture is the main source of livelihood for farmers in the Anglophone regions of Cameroon (English-speaking Northwest and Southwest regions). About 75% of the population earns their livelihood through farming. Many of these farmers are women who produce the bulk of food eaten in most households across the regions and beyond. Farmers in these regions are faced with many challenges from the impacts of climate change and the current Anglophone crisis.

Thousands of smallholder farmers in the Anglophone regions have been forced off their lands into neighboring villages and towns due to armed conflict between the Francophone (French-speaking) controlled government forces and Anglophone separatists seeking to form an independent state.

As a result of the Anglophone crisis, crops have been left unprotected from extreme weather, pests and diseases, and abandoned livestock have starved to death or been killed during military invasions. The forced abandonment of these farms has crippled the economy of the regions, increasing hunger, malnutrition and poverty and turned food producers into food beggars. Furthermore, many displaced farmers are faced with limited access to agricultural extension services, land, inputs, credit and trainings.

Community Initiative for Sustainable Environment and Gender Development (CISEGD), in partnership with the Presbyterian Hunger Program (PHP), is working to promote sustainable agriculture and serve people and communities in need of sustenance and hope in Batibo, in the Northwest region of Cameroon (one of the two Anglophone regions).

Since the Anglophone crisis started, CISEGD has been working on several projects and activities that are helping farmers to engage in sustainable agriculture for a better future. The integrated yam project, carried out in 2018, is a model of an integrated farming system aimed at fighting hunger through improving soil productivity to increase yam yields for nutrition, livelihood improvement and biodiversity conservation. The project has helped farmers and displaced people address hunger, rapid degradation of rural agricultural and forest landscapes, lost biodiversity, extreme poverty and climate change.

In 2019, CISEGD initiated a project to promote smallholder integrated farming systems in which staple food crops, vegetable gardens, trees, bee farming and small animal husbandry were intermixed on the same piece of land in a harmonized and symbiotic manner, where each component supports and benefits from the other while conserving the environment and improving the overall productivity. Thanks to PHP support, an integrated farm composed of livestock, beekeeping, tree planting, mushroom cultivation and vegetable production components were established on 1.5 hectares of land in Guzang village, Batibo, Cameroon to serve as an agricultural training farm that has and will continue to empower hundreds and thousands of smallholder farmers to adopt sustainable farming practices that enhance agricultural productivity on a small land area while conserving the environment.

In 2020, CISEGD also initiated a project known as “passing on the gift” to support vulnerable farm families in Batibo affected by the Anglophone crises. The project is helping farmers and people internally displaced by the crisis to achieve social, economic and environmental secured livelihoods through animal banking/donations and capacity building. Hundreds of people have been empowered with animal gifts and mushroom seeds to kick-start their own farm enterprise. Each farm family who receives an animal/mushroom seed gift is expected to pass on the first female offspring as well as mushroom seeds to another farmer in need.

Thanks to PHP grant support, generations of farmers in Batibo will benefit from these efforts.

God, we pray for the Anglophone farmers and a return of peace. Help our farmers to take care of the earth’s resources, cherish them and pass them on safely to the next generation. Bless all those who have contributed to our work and grant us perseverance and openness to your will. Amen.