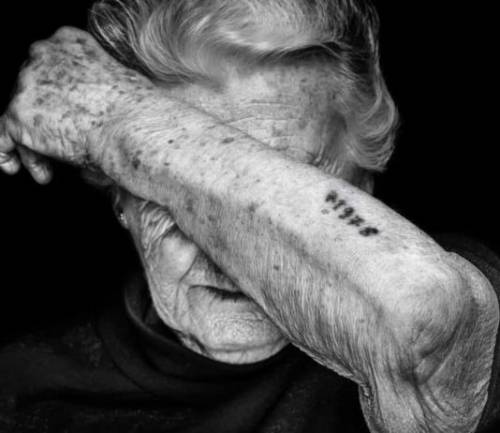 One gesture, one story: Nina Weil survived the Theresienstadt and Auschwitz concentration camps. She was tattooed with the number 71978. Photo credit: U.N. – Gamaraal Foundation

Henry owned a parcel of land. He had bought a 100-by-100-foot lot in a dangerous part of town years ago hoping to make a profit when the neighborhood improved. For a time, he lived in the vacant building on the lot to chase away squatters and even got beat up a few times. Henry was a big man. What I remember most about Henry was the way he walked, with a purposeful stride, wearing a white button-down shirt with the sleeves rolled up. My partners and I had gone to see him about buying that piece of property. He was a tough negotiator, but eventually we came to an agreement.

Henry was a man of few words and when we did talk, it was all about work. But later when I called to say goodbye as I was leaving the company, I was surprised when he asked about my future plans and my family. After I told him, he volunteered that he had lost his parents and his siblings in the concentration camps. He was the only one in his family to survive. He said several times, “It was just horrible … too horrible to talk about.” There was a long silence. Eventually we wished one another well and hung up. Henry never had a family of his own, but we (and he) built 60 units of affordable housing for low-income families on that lot, with a playground in the back. He came to the opening ceremony.

With the passing years, there are fewer survivors to remind us about the horrors of the Holocaust. Henry is a witness to that horror. One person’s hell. One person’s anguish and unspeakable suffering. We live in the age of disinformation, fake news and conspiracy theories. Holocaust deniers and anti-Semitism are on the rise. For Henry’s sake, we must speak truth to power.

Dear God, may we not forget what Holocaust means and what the survivors of the Holocaust have suffered. May we speak for the strangers and neighbors in our midst, giving voice to the voiceless. May we work for your justice in the face of evil. In your Holy name we pray. Amen.