Five churches complete mission to clear millions in medical debt for more than 1,000 households in Minnesota and Wisconsin 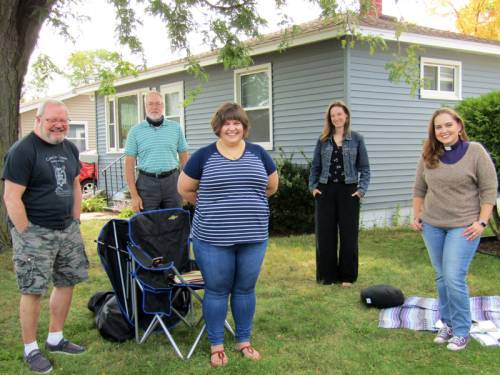 Pastors in the “Tuesday morning group” celebrated reaching the $15,000 medical debt-forgiveness goal, which erased more than $2 million in medical debt for over 1,000 households in Minnesota and Wisconsin. (Photo by Rev. Katie Schlauderaff, Faith Lutheran Church)

In a year like no other, five faith communities in southeastern Minnesota have worked together to clear more than $2 million in medical debt for 1,057 households in Minnesota and Wisconsin.

The ecumenical Lenten project stretched beyond 2020 Lent due to the pandemic. The households impacted received a notice in a yellow envelope informing them that they are no longer liable for this medical debt.

“Even little churches in small towns can make a big impact in their communities,” said the Rev. Rachel Rosendahl, pastor of Grace Presbyterian Church in Winona, Minnesota, one of the churches involved in the medical debt-forgiveness fundraising. This will give these families a chance to start over and build better credit, she said.

In addition to Rosendahl at Grace Presbyterian, the Rev. Danielle Bartz, First Congregational Church of Winona, (United Church of Christ); the Rev. Michael Short, Central Lutheran Church, (Evangelical Lutheran Church in America); the Rev. Jeff Franko, Cedar Valley Lutheran Church (ELCA); and the Rev. Corrine Haulotte, Lutheran Campus Center of Winona, (ELCA) form the interdenominational “Tuesday morning group.” They meet on Tuesdays— virtually during the pandemic — to study Scripture and share ideas for ministry and mission. These pastors may represent different denominations and have different ideas, but they all want the same things: to help where they can and to spread the Good News.

The pastors say their congregations stepped up, reaching the $15,000 fundraising goal by mid-July. Once the funds were raised, the churches partnered with the New York-based RIP Medical Debt, a nonprofit with expertise in finding and purchasing medical debt in bulk for a fraction of its original cost. By creating a campaign through RIP Medical Debt, more than $2 million in medical debt was purchased and forgiven through the collaborative fundraising of these faith communities.

“We are so thankful for the overwhelming generosity of our churches,” said Franko of Cedar Valley Lutheran Church. “Clergy may have a lot of ideas, but it is our congregations that make them real. They gave from their abundance, knowing that they will likely never know whose life they were changing.” See the pastors’ gratitude video to their congregations here.

RIP Medical Debt targets the portfolios for those in or near poverty level, using donors’ funds to wipe out medical debt, beginning with those who need it the most. The debt is erased millions of dollars at a time for pennies on the dollar. Then families are sent forgiveness notices to let them know the debt is gone. Medical debt relief is random, based on qualifying accounts on the secondary debt market. At this time, it is not possible for individuals to request a medical debt abolishment.

According to the website of RIP Medical Debt, 79 million Americans choose between paying their medical bills or paying for basic needs like food and shelter.

“My community is made up of college students, so they have limited means,” said Haulotte of Lutheran Campus of Winona. “But by partnering with RIP Medical Debt, their small donations created a huge difference in the lives of many people.”

RIP Medical Debt is a nonprofit organization that allows donors and organizations to erase the debt of Americans whose lives have been destroyed by unjust medical debt. Founded in 2014 by two former collections industry executives, Craig Antico and Jerry Ashton, RIP rose to national prominence on a TV episode of “Last Week Tonight with John Oliver,” viewed almost 10 million times, where RIP facilitated the erasure of $15 million in medical debt for only $60,000. Since its founding, RIP Medical Debt has erased over $1 billion in medical debt. To learn more, visit ripmedicaldebt.org.

Gracious God, help us to continually look for you in all of Creation and help us always to be a blessing in your sight. Amen.