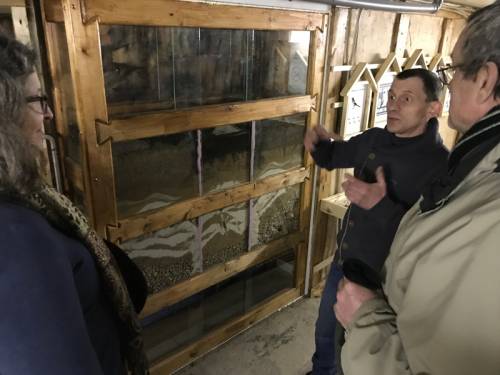 At its recent virtual meeting, the Belarus, Ukraine, Russia Mission Network (BURM) invited an internationally recognized Presbyterian to brief partners on the impacts of climate change and the importance of the work faith-based communities are doing to bring about change.

The Rev. Bill Somplatsky-Jarman, a member of the World Council of Churches Climate Change Steering Committee, spoke to the group. A retired staff member of the Presbyterian Mission Agency, he has been involved in looking at the intersection of Creation and justice since the 1980s.

Beginning with a historical perspective, Somplatsky-Jarman said the Presbyterian Church (U.S.A.) and other mainline denominations began to focus on climate change in the 1980s. That mirrored a resurgence in environmental issues globally such that by 1990, the Time Magazine Person of the Year was the planet Earth.

The PC(USA) began to update its policies and form programs addressing the increased interest. In 1988, Somplatsky-Jarman became the first half-time staff member focused on environmental justice. This led to a major statement adopted by the 202nd General Assembly (1990) held in Salt Lake City called “Restoring Creation for Ecology and Justice.” It was based on a study guide his office created called “Keeping the Creation.” It was overwhelmingly adopted.

Presbyterians for Earth Care started in 1995. The Presbyterian Peacemaking Program held a conference called “Making Peace with the Earth.” It was the largest one they had ever had, with more than 600 attending. The conferences became so big they eventually had to be split between east and west. Other groups, such as Interfaith Power and Light, were created to work on retrofitting church and personal properties to become more energy efficient.

Similar actions were occurring in Europe. In the aftermath of the WCC’s Justice, Peace and Integrity of Creation conference, a group called the European Christian Environmental Network was formed in 1989 under the Conference of European Churches. Somplatsky-Jarman said the faith community felt it was important to come alongside the United Nations process and encourage them to look upon climate change as an issue of justice and morality.

In 2015 in Paris, all the nations of the world made a commitment to reduce their carbon footprint and to do so in a way that would hold climate temperature rise to 2 degrees centigrade, with a goal of 1.5 degrees centigrade. Two degrees was what scientists said was the minimum to prevent catastrophic changes in climate. The countries had to agree to assess the impact of climate change on their countries and do that on a regular basis, as well as develop implementations on how to meet those impacts and reduce their carbon footprint. Unfortunately, all the commitments that came in did not meet the goal of reducing temperature rise.

The five-year review process was set to occur in 2020 but didn’t happen due to the global pandemic. Somplatsky-Jarman said countries are to submit enhanced targets for their contribution to reducing emissions. For the churches, there have been efforts to highlight the need for enhanced commitments and speeding up the reduction process.

The BURM network learned that in terms of overall greenhouse gas, Belarus is a minor player, .24% of the overall total. Ukraine is similar at 1.04%. Russia is 7.23%, relative to its economy and geographic size. The United States accounts for only about 5% of the global population but is responsible for 30% of global energy use and 28% of carbon emissions.

Somplatsky-Jarman encouraged the group to look at the Yale Center for Environmental Law and Policy’s Environmental Performance Index, which uses dozens of criterial to evaluate how each country is doing in terms of meeting its environmental challenges. One hundred eighty countries are evaluated annually in the process.

Initially Russia resisted signing on to the Paris Agreement, but in 2019 announced it was joining. Around the same time, President Donald J. Trump said the U.S. would withdraw from the process.

Ellen Smith, World Mission’s regional liaison for Eastern Europe, had invited two Belarusians involved in climate issues, but that they became stranded on the side of the road and could not make the call.

Lord, continue to bless all those who reach out to those in need. Amen.