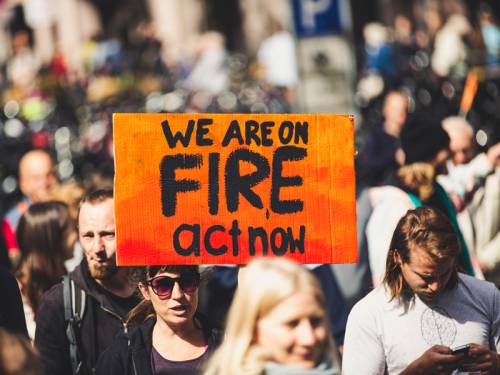 Climate change, according to the rev. abby mohaupt, has made it more difficult for many people, especially the poor, to access six keys to human existence — food, access to water, rest, home, safety and love.

“And if you’re a person of color,” said mohaupt, who lowercases her name and title, “you are more likely to be affected by climate change and to live in systemic poverty because of systems of racism in the United States.”

Mohaupt spoke recently to the 90 or so people taking the Underpinnings of Systemic Poverty course as part of the Presbyterian Church (U.S.A.)’s Matthew 25 invitation. She’s director of GreenFaith’s Green Seminary Initiative and is moderator of Fossil Free PCUSA, which has urged General Assembly gatherings in recent years to divest from fossil fuel companies. She spoke from the sustainable farm she works in Texas.

Mohaupt said climate change is impacting ancient customs as well as modern living. A Native American friend told her it’s now dangerous to participate in traditional whale hunting because the ice is getting increasingly thinner. Some members of the hunting party simply don’t return, the woman told mohaupt.

“We need a movement and systemic change that makes the world different,” mohaupt said, “that says all injustices need to be changed.”

Mohaupt also shared the work of organizations, including Climate Justice Alliance, a group she said is working to help transition the economy from one that’s extractive to one that’s regenerative, creating economic institutions that, according to the organization’s website, are “rooted in ecological resilience and equity.”

That approach, mohaupt said, involves “filtering decision-making through the will of the community and getting power to as many people as possible.”

Asked by one of the participants, “how do we get rid of greed?” mohaupt said that’s the work of the church, not economists. “If we are living into Reformed Christianity,” she said, “we fight greed all the time.”

“We all live in our own economy,” mohaupt said. “What would it be like to change the economy in your neighborhood, your town and your country, to be more just and moral, so people can leave (their community) to be safe and anybody who stays will be safe and have access” to the six keys to human existence mentioned above?

Earlier in the webinar, the Rev. Nicholas Johnson, pastor of Raritan Valley Baptist Church in Edison, New Jersey, continued his Bible study, “Jesus and Economic Justice in the Gospel of Luke.” The installment, based on Luke 8:9–10 and especially Luke 16:19–31, was called “Rock my Soul: The Parable of Lazarus and the Rich Man.”

That parable, Johnson noted, is divided into two scenes. The first included “the order of things”: the rich man dressed in purple and feasting, and Lazarus chronically hungry with sores all over his body. Great gates divide the two on Earth.

The second scene features “the disorder of things”: After his death, the rich man is being tormented in Hades. Lazarus, who’s also died, has been carried away by the angels to be with Abraham. A great chasm divides the two in the afterlife.

Notice, Johnson said, that Lazarus is named in the parable, while the rich man is not. But even as he suffers in Hades, the rich man still sees Lazarus as being beneath him, asking Abraham to send Lazarus to slake his thirst and warn his brothers.

The parable “is a vivid retelling of Jesus’ Sermon on the Plain (in Luke 6:20–26),” Johnson said. The larger issue here, he said, is that “it is impossible to have great concentrations of wealth at the top of the social system without massive misery at the bottom.”

Almighty God, we pray for those who are picking up the pieces of their lives. We pray that out of chaos hope will rise, and we offer ourselves humbly in service. In Christ’s name. Amen.