President Trump’s recent decision to revive the coal industry and closely scrutinize the previous administration’s Clean Power Act has been met with strong opposition among leaders in the Presbyterian Church (U.S.A.). While the president has promised that the action will create jobs, many say the executive order will set the country back years in environmental progress. 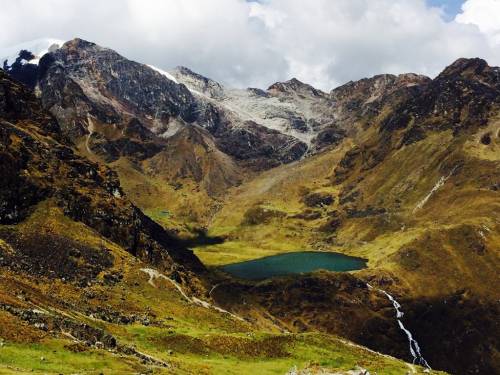 Huaytapallana Glacier, approximately 15,000 feet above sea level in the Andes Mountains of Peru is predicted to be completely gone in less than two decades due to climate change. (Photo by Rebecca Barnes)

“The General Assemblies of the Presbyterian Church (U.S.A.) for decades have passed policies that share concern for God’s creation, our obligation to be good stewards of the natural world, and our role in reducing energy dependence, promoting renewable and sustainable energy use, and otherwise caring for the earth,” said the Rev. Rebecca J. Barnes, coordinator of the Presbyterian Hunger Program. “In the past few months, President Trump has rolled back national environmental protections related to water, methane regulation and national monuments while also proposing drastic cuts to national governmental agencies doing key climate research and regulation such as EPA and NOAA. As Presbyterians, we are called to make our voice heard, to protect and defend all people and creation, and to push for just and sustainable solutions to environmental crises.”

Under the Clean Power Act, coal-fired power plants are to be phased out and replaced with new wind and solar farms. President Obama had said the plan would prevent nearly 3,000 premature deaths and almost 100,000 asthma attacks per year by 2030.

The Rev. Abby Mohaupt, a member of the Presbyterian Hunger Program Advisory Committee, says the president’s executive order is one more act of his administration’s denial of climate change.

“The urgency of climate change requires us to stand as people of faith in general and as Presbyterians in particular and to speak up with prophetic voices,” she said. “The groans of creation and people on the front lines of the climate crisis will not allow our silence, nor will our faith in Jesus Christ. We cannot leave the work of creation up to secular power. Now more than ever, we must work to end our dependency on fossil fuels and drastically reduce our carbon emissions.”

President Trump has argued that the Clean Power Plan has cut into oil, coal and gas company profits and said he would “reduce job-crushing regulations.”

The Rev. Jimmie Hawkins, director of the Office of Public Witness, says the president’s executive order is a tragic turn for the future of the nation and entire planet.

“With one stroke of his pen, the president has rescinded the Coal Mining Moratorium on U.S. federal lands and substantially weakened a number of environmental protections,” he said. “His signature threatens the health of children already suffering with respiratory illness, endangers seniors living in environments already polluted by industrial waste, and places at risk the well-being of every living person the world around.”

Hawkins said that as people of faith, the church must speak with one voice.

“We affirm that climate change is real and impacted by the actions of human beings. We can protect the environment and affirm the dignity of work as we come together to produce solutions which enhance all aspects of created life,” he said. “But environmental justice must be a priority or we will not have a future to work towards.”

Mary Love is a member of Crescent Hill Presbyterian Church in Louisville, Kentucky, a PC(USA) Earth Care Congregation. She has been involved in environmental justice work in Kentucky and Central Appalachia for almost 10 years.

“I am disheartened but not surprised by the president’s action to dismantle the Clean Power Plan,” she said. “I only pray that the dismantling of the plan will take longer than it has taken so far to fully implement it.”

In January 2016, the Obama administration placed a three-year moratorium on new federal coal leases, saying the program needed to be updated to ensure a fair return for taxpayers and address climate change. But the Trump administration has accused the former president of waging a war on coal and threatening the future of coal miners.

Gracious and loving God, share with us your creative spirit as we engage in new ways to minister in community. Keep us mindful of you as we seek to remind those we encounter that you are indeed mindful of them. Amen.