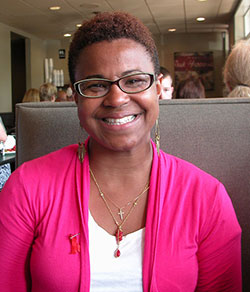 Fresh out of college, Everdith (Evie) Landrau embarked on her first international experience—a month in Geneva. The visit was also her first exposure to global ecumenical body—the World Council of Churches.

“It was life-changing,” she said. Landrau served as a steward at the 2006 meeting of the WCC Central Committee. She joined young adults from around the world in helping with the logistics of the gathering while learning about issues important to the global church.

Now a member of the Central Committee herself, the 32-year-old minister is one of a new generation of ecumenical leaders in the Presbyterian Church (U.S.A.). “Evie has established herself as a well -respected member of the Central Committee,” said the Rev. Robina Winbush, director of ecumenical relations for the PC(USA)’s Office of the General Assembly.

Landrau, who is of African and Taíno Indigenous heritage, was born in Puerto Rico and grew up there and in New York City. Involvement in the WCC, she says, has opened the door to “opportunities that people like me don’t often get.”

Where else, for example, could she have discussed gender, sexual orientation, racial and cultural disparities, and related issues with Pacific Islanders, Anglicans from Europe, and Orthodox leaders from Russia and Ethiopia? She has engaged in these conversations while serving on the WCC’s Reference Group on Human Sexuality.

She also has had the opportunity to connect with women around the world by helping launch the Pan- African Women’s Empowerment Network. This new WCC initiative seeks to build community among women of Pan-African descent through study, spiritual reflection and action.

Landrau’s ecumenical involvement takes her overseas about twice a year, most recently to a meeting in Beirut, Lebanon, in December. Back home in North Carolina, where she has lived for the past 10 years, Landrau works as a dance and global studies teacher at a middle school and as the part-time youth director at Paw Creek Presbyterian Church in Charlotte.

Landrau grew up Roman Catholic but joined the Presbyterian church while attending college in Springfield, Massachusetts. Her grandmother had told her to be sure to go to church on Sundays, and there was a church right across the street from the college campus.

The church was led by an African American pastor, the Rev. Alice Kelly, who soon became her mentor and encouraged her to consider a career in ministry. When Landrau sought the opportunity to become a steward at the WCC Central Committee meeting in 2006, Kelly supported her through the application process.

Her entry into global ecumenism was eye-opening, Landrau recalled. “For the first time, I became aware of injustices around the world.” She and the other young stewards learned about the WCC’s involvement in peacemaking and efforts to address poverty, racism, climate change and other challenges facing member churches.

Awareness of these issues has fueled her involvement in local ecumenical activities. She says she was energized in a previous pastorate by an ecumenical partnership involving five or six other Charlotte congregations. Episcopalians, Baptists, Methodists, Pentecostals and Presbyterians came together to worship and advocate around community needs.

“There was a real sense of belonging, even though our theologies were diverse,” Landrau said. The experience reinforced her conviction that Presbyterians are one part of a much larger Christian witness in the world.

“We’re not the only prophets,” she said. “God has many prophets doing the work.”

Landrau is currently working toward a DMin degree, and her doctoral dissertation was inspired by her involvement in another local ecumenical endeavor called Village Heartbeat. Launched by the Mecklenburg County Health Department, the program has enlisted 31 congregations to address health disparities in underserved parts of the county.

Ecumenical involvement has been a lifeline for Landrau, especially in her vocation as a minister in the PC(USA). After trying unsuccessfully to find full-time employment as a pastor, she made the decision to take a teaching position while working part-time in a congregation.

“I wanted to have the stability of a full-time job, but also to stay connected to the church,” she said.

Becoming bi-vocational, Landrau said, has forced her “to look at ministry in broader ways.” She has learned that “I’m a minister wherever I go, and in whatever work I do”—whether it’s teaching dance to middle-schoolers or contributing to a global ecumenical effort to empower women.

“My ecumenical responsibilities have been an inspiration to hang in there until God speaks otherwise.”

God, we pray for our young leaders like Evie. May their paths continue to lead them to minister to others’ needs. Amen.