Pastor served as general secretary of the Presbyterian Church of Congo 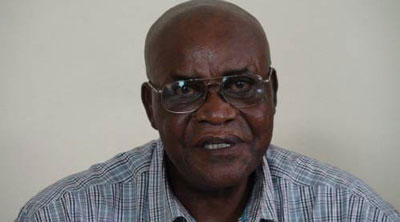 Presbyterian World Mission is celebrating the life and mourning the death of the Rev. Dr. Mulumba Musumba Mukundi, general secretary of the Presbyterian Church of Congo (CPC) and rector of the Sheppards & Lapsley Presbyterian University of Congo. Born in 1945, he passed away earlier this spring.

Mukundi served as the general secretary of the CPC since 1991 and was known for warmly welcoming mission personnel and church visitors to the Congo. He received his bachelor’s degree in theology from the Reformed Faculty of Theology in Kasai and his master’s degree from the Central Africa Theological Faculty, with a scholarship from the Presbyterian Church (U.S.A.).

In 1988 he defended his doctoral thesis, “Witchcraft Among the Kasaian People of Zaire: Challenge and Response,” at Fuller Theological Seminary, School of World Mission. As part of his ministry, families with children who had been accused or suspected of sorcery or being a witch would seek him out. Alongside other responsibilities, Mukundi continued to pastor the Dinanga Presbyterian Church in Kananga City, where he was known for his caring approach that nurtured restoration of family ties.

In 2006, Mukundi was named a Universal Ambassador of Peace and in 2012 he received the Medal of Honor from the DRC government. He was also president of the board of the Protestant University of Congo (UPC).

The Rev. Dr. Hunter Farrell, former director of World Mission, served as a mission co-worker in the Congo and knew Mukundi well.

“[He was] a theologian who transposed the gospel into the texture of Congolese culture, a practical missiologist, a gifted teacher—but first and foremost, Pasteur Mulumba was a pastor who cared for people,” Farrell said. “It was my privilege to study, work and live alongside him in California and Congo. I was blessed to serve as his associate pastor at Paroisse Quartier SNEL in Kananga and I give thanks to God for what Pasteur Mulumba taught me about graciousness.”