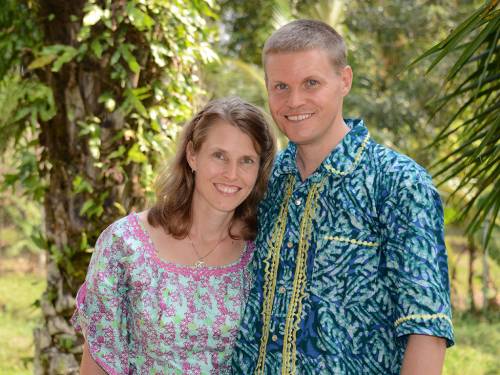 Kristi and Bob Rice have accepted a call to serve in South Sudan. (Photo provided)

Presbyterian Church (U.S.A.) mission co-workers Bob and Kristi Rice have accepted a call to serve in South Sudan after six years in the Democratic Republic of the Congo.

Bob will serve as an instructor at Nile Theological College in Juba, teaching a broad range of courses in theology and biblical studies, with a focus in the academic disciplines of systematic theology, public theology and ethics. Kristi will serve as an economic and development advisor for the South Sudan Presbyterian Evangelical Church. She will work to strengthen the identification, development and management of projects that support the financial goals of the church and improve the health and well-being of the communities.

The couple began service as mission co-workers in Congo in January 2010 in partnership with the Presbyterian Community of Congo. They were involved in visioning and implementing new initiatives in Christian education and evangelism, including the development of curriculum and traveling throughout the region as members of the evangelism team.

The Rices met in Rwanda in 2003, when Bob was a short-term mission worker with African Enterprise and Kristi was working with World Relief. When they returned to the United States, they married and Bob finished his MDiv and MA degrees at Fuller Theological Seminary in Pasadena, California. He was ordained Feb. 7, 2010, at Menlo Park (California) Presbyterian Church, which is where he worshiped when he was growing up.

The Rices feel drawn to service in South Sudan, an area that faces numerous challenges. A peace agreement, ending Africa’s longest civil war, was signed in 2005 and South Sudan gained independence from Sudan in 2011. Just two years later the country was engulfed by fighting when President Salva Kiir accused former Vice President Riek Machar of attempting a failed coup. Peace talks were held in Ethiopia in 2014, and a deal was signed under threat of United Nations sanctions against both the government and rebel sides in 2015. An ongoing and increasingly brutal new wave of violence broke out in July 2016 and has caused widespread famine. The conflict has displaced more than 3 million people.

“It will not be an easy place to live,” the Rices wrote in a letter to supporters. “But we are encouraged that the churches there seek to be a light for Christ and a voice for peace in the midst of the suffering. There is so much potential for the impact and reach of the gospel as Christians in South Sudan are coming together and identifying the body of Christ as their primary loyalty over tribe and ethnicity.”

Almighty God, thank you for raising up Christian leaders. Guide and protect them as they seek to make a difference for you in their areas of influence. In the powerful name of Jesus, we pray. Amen.