From anger to grace: one woman’s transformation

When I met her, Consulee was a 57-year-old wife and mother of five who was angry at God and had turned to alcohol for comfort. Her husband, a struggling farmer, had followed the Hutu-led government of 1994 and had participated in the genocide of Tutsi (fellow Rwandans). After the genocide, he was sentenced to five years in prison for participating in it, and their land was confiscated. Consulee protested that he had only done what the government told him and now they were being punished. Her oldest son had taken care of her while her husband was in prison and had faithfully prayed for her. 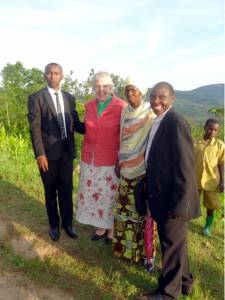 M. Catherine Day with Philemon and his parents. (Photo provided)

Her third son, Philemon, was one of my students at the Protestant Institute of Arts and Social Sciences. He frequently translated for me when I preached in villages. One Sunday we went to a church several kilometers from his home, and his parents walked to see him. His mother attentively listened to the preaching on God’s grace because Philemon was translating. After the service, she gave me a strong hug, then took Philemon aside for a long conversation.

A few months later, Philemon had an accident and his Achilles tendon was damaged. He had no health insurance because he could not afford it, so what might have cost him $5 cost him $80. He had no way to pay the bill. The students of the English chapel that I serve took it upon themselves to assist him. We raised the money for his hospital bill, and they assisted him to and from classes and carried food to his room for him. His mother was baffled that those who cared for him were Hutu and Tutsi (although those terms are no longer used in Rwanda today). She had many questions for Philemon.

Several months after his accident, Philemon came to me with a request from his mother. She wanted to rejoin the church and she wanted me to stand as her sponsor. She said that she had turned from her anger. The turning began when she listened to God’s grace preached, and it was completed when she saw that grace in actions toward her son by those who should have been enemies. I gladly stood as her sponsor. After the service, at a family celebration, I listened to her simple testimony. She told those gathered, “I once loved beer but now I love Jesus.” I saw her oldest son hastily wipe tears from his cheek. He was the one to first show her God’s grace and had been praying for her throughout her anger.

Here in Rwanda, reconciliation is happening one person at a time and one situation at a time as an answer to prayer and the working of the grace of God.

Holy God, may your grace be poured out on all who need your forgiving, reconciling grace for the hurts they have experienced. Please continue to heal those countries where relationships have been ravaged by fighting, especially Rwanda. Amen.