What began as a planned screening of Presbyterian Disaster Assistance’s newest documentaries in Dayton, Ohio, recently morphed into a communitywide event dedicated to peace.

The original idea was to simply schedule screenings of the most recent Presbyterian Disaster Assistance (PDA) documentaries on immigrant detention and refugee resettlement (Locked in a Box and To Breathe Free) at Westminster Presbyterian Church in Dayton. What Westminster member Sally Dyer didn’t realize, however, was that a number of organizations across the city were planning their own awareness events around these issues. 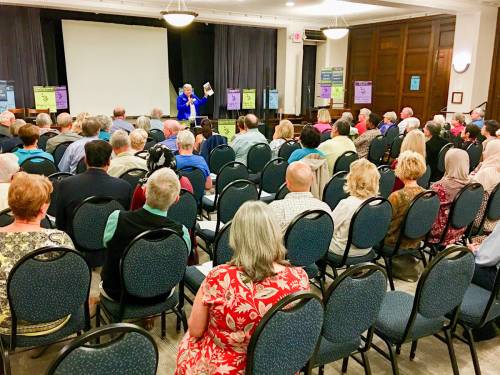 Dyer, a National Response Team member with PDA, then began hearing about the other events planned by the Dayton International Peace Museum, the University of Dayton, the Dayton Opera and other entities. The events included talks, concerts and a presentation of the opera The Consul.  So, Dyer began working with the other organizations to create an overall theme, “Building Peace Through the Arts 2017.”

“We really felt the Spirit was leading the way for this,” she said. “It just grew, and then we got our friends at the local mosque to schedule a screening of the films. It was just wonderful.”

As word about the project spread, enthusiasm grew. “The more people we talked to, the more people we heard from in the community that were interested,” Dyer said. “Catholic Social Services had a speaker coming in to speak on immigration for a speakers’ series, we had these films to show and the opera, community college and Peace Museum were all doing something. It just kind of morphed into this big deal.”

“The core of what the Presbyterians are doing is to help people understand what it’s like to be ostracized and build a world where people have something to share,” said Leggett. “Dayton is unique in that we’ve brought together the opera, veterans and a range of people to explore peacebuilding together.”

Both documentaries were shown as part of the Peace Literacy Dayton Film Forum. The documentaries have already received high praise and recognition at various film festivals around the country. But PDA leaders believe scheduled showings at churches and other organizations often lead to action.

“We show our films at a film festival, and people respond to it and then they go home. In this case, everyone was here for the purpose of learning, but also to engage and do something, whether as a faith community or a college student who is interested in visitation ministry at detention centers,” said David Barnhart, PDA associate for story ministry and director of the films. “Everyone that came wanted to learn and do something. That’s the purpose of these films and exactly what we want them to do, to be, a voice or medium to connect people and find their own way to engage with the issues.”

Loving God, bless all whom you call to serve, whether down the street or across the world. May your light shine in all that we do. In Jesus’ name. Amen.