The Presbytery of Philadelphia, which is celebrating its 300th anniversary this year, recently welcomed 2,000 worshipers to a special Saturday service in North Philadelphia. 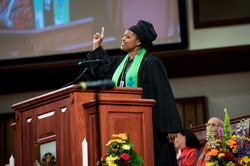 Presbytery officials, national leaders of the Presbyterian Church (U.S.A.), the mayor of Philadelphia and members of the presbytery’s 124 congregations were among those who gathered inside Enon Tabernacle Baptist Church, an historic congregation new to many attending. A presence in Philadelphia since 1876, Enon opened its expansive main sanctuary and meeting hall to the presbytery for the day.

In their remarks, Frank Spencer, president and CEO of the PC(USA)’s Board of Pensions, and Moderator Johnnie Monroe of the Synod of the Trinity noted that their organizations also turn 300 in 2017. 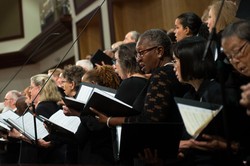 Between musical performances by the 45-church-strong Celebration Choir, speakers emphasized the Presbytery of Philadelphia’s historic roots — the first presbytery, and the presbytery where a nation was born — and its ongoing work beyond denominational lines. “Happiness comes from service to others,” Kenney said. “Diversity is [Philadelphia’s] strength.”

Sermons by the Rev. Craig Barnes, president of Princeton Theological Seminary, and the Rev. Denise Anderson, co-moderator of the 222d General Assembly (2016), spoke to the presbytery’s celebration theme of “Born in Faith, Rooted in Grace, Living into Hope.”

“A tree rooted in a stream of living water grew a new limb 300 years ago,” Barnes said. “That tree was the Presbytery of Philadelphia. … You will care for others in your next 300 years because that’s your story.”

“Our gatherings are our way of getting rooted and getting ready,” Anderson declared. “God is going to use you, Presbytery of Philadelphia!”

The Rev. Jerry Van Marter, interim director of communications for the Office of the General Assembly, singled out one of the projects — the John Gloucester House and Rearing Successful Sons. Noting that John Gloucester was the first African-American minister ordained by the Presbyterian church (ordained by Philadelphia Presbytery) and the founder, in 1811, of the first African-American Presbyterian congregation chartered in this country — also by Philadelphia Presbytery — Van Marter said, “Praise be to God for this extraordinary witness.” 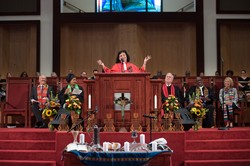 After the service concluded with a blessing by Presbytery of Philadelphia Moderator Janel Dixon, many attendees gathered in Enon’s meeting hall to learn more about mission partners, examine church artifacts, enjoy refreshments and be entertained by a John Witherspoon impersonator.

“For this day to have happened in a way that was representative of who we are,” Santana-Grace said, “it took hundreds of people. More than 400 men, women and youth participated in the worship service as liturgists, choir members, ushers, Communion servers and banner carriers.”

She added, “I am humbled to serve with a people who choose to believe we can still build beyond what we can see with our eyes, who understand that God’s plans for us are far greater than what we can see at the moment.”

Loving God, by your grace we partner with the Spirit to do your will and work in the world. We pray for hearts ready to be made disciples anew, for spirits ready to serve, for words to share your good news, and for your grace and power to unite us all in the strong name of Christ Jesus. Amen.