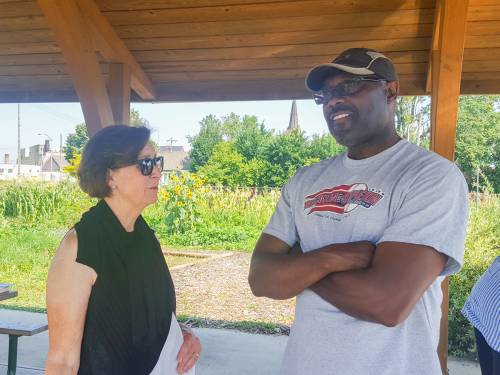 Sarah Jane Moore grew up in a small Illinois farm town where few spoke of diversity. The town had no minority residents, and only a few people of color attended her college.

Fast-forward a few years when Sarah, newly married, moved with her husband to Mississippi.

“My eyes began to be opened with my first teaching job in Biloxi in 1969. That was the first year my school became integrated,” she said. “I was shocked that the schools had been able to delay integration since I had learned about the Brown vs. Board of Education ruling from 1954.”

But despite the integration, that first year was surprising for Moore.

“I was further shocked by the attitudes of some of my fellow teachers and even two of the students in my sixth-grade class,” she said. “Integration that year in the sixth grade consisted of two shy little girls. It must have been really scary for them, but I made sure they weren’t bullied, and they did eventually start to feel more comfortable and safe.”

Moore and her husband later moved to Chicago, where she worked for a faith-based alcohol/drug treatment program.

“I met people of many races and background and heard their stories of driving to my suburb to look for a job and being pulled over by the police for — not fitting the demographic, driving while black, take your pick,” she said. “I would drive through neighborhoods where nonprofit social service agencies had a large footprint and yet people seemed demoralized.”

Moore first heard of Self-Development of People while working at a nonprofit incubator in Chicago.

“Part of my job was to help the startup nonprofits raise money and more importantly, learn how to raise money for their cause,” she said. “Even though I am a ‘cradle Presbyterian’ I didn’t know about SDOP. I knew about the One Great Hour of Sharing but not that it supported something as unique as SDOP.”

SDOP works to establish partnerships with groups in the U.S. and other countries that are oppressed by poverty and social systems; help people take charge of their own lives; and produce long-term changes in people’s lives.

“They were highly motivated, and that group of five providers grew to at least 150. And some have opened profitable stand-alone child care businesses,” Moore said. “The day laborers were being cheated by the people who hired them, charging unreasonable fees for transportation to job sites and then short-changing them on their wages. That group is now a nationwide organization.”

Moore says she was so inspired that her Presbyterian church was partnering with people who make their own decisions and work to help themselves that when she retired, she began serving on the Chicago Presbytery SDOP Committee.

After serving two terms, Moore applied to and was quickly elected to the national committee after learning there was an unexpected opening.

Moore says she is always excited to see SDOP-funded projects grow from small operations to successful ones.

“I also love the successful projects involving people who were formerly incarcerated who find ways to get the training and experience needed to rejoin the workforce,” she said. “We also write to the projects when the funding ends, giving them a list of Presbyterian churches to get involved with.”

“It is the most inspirational reward for volunteering imaginable,” she said. “At most national gatherings, we try to hear from or visit funded projects, and we learn a lot from those encounters and are inspired to go back and keep plugging away.”

One of the biggest challenges, according to Moore, is building awareness of the ministry and the need to recruit committee members of all ages at the mid council and national level.

“We continue to be the best-kept secret, unfortunately. I hope we can continue to recruit committed people to serve in a time of reduced resources for many presbyteries and increased need for volunteers to help in areas that paid staff covered in the past,” she said. “We need volunteers who understand that their job is not just to do site visits and evaluate applications, but to share the stories and good news about what people are able to do for themselves with a grant from SDOP.”

“Sarah Jane’s wisdom and willingness to engage mid councils in the work of SDOP has truly been a blessing for all of us and the church. Her acumen in engaging leaders, congregations and communities is at the heart of what SDOP is about,” said the Rev. Alonzo Johnson, SDOP coordinator. “Her work is indicative of where the church is called to be in making relationships and addressing issues centered around poverty.”

Lord, let us embrace your mission in all its forms. Thank you for your Son, for your abundance, for a new song that fills our hears and for the ability to love. Amen.