Revs. Shelvis and Nancy Smith-Mather named to Emory University’s ’40 Under 40’ class of 2018 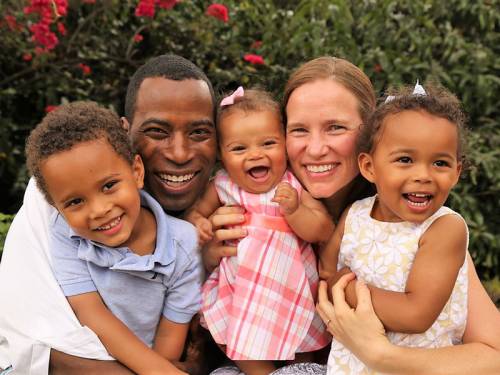 Each year, Emory University and many other organizations around the country name a class of leaders who have made a significant impact in business, research, leadership, and public service or philanthropic endeavors. This year, PC(USA) mission co-workers the Revs. Shelvis and Nancy Smith-Mather were named to Emory’s 2018 class of “Forty Under Forty.”

Although nominated together, the Smith-Mathers are being recognized individually for their dedication and significant impact. They were selected from hundreds of nominees, and they are the only husband and wife team to win the award at Emory.

“We give God the glory for this honor, as God opened the doors for us to work alongside our South Sudanese sisters and brothers,” said Nancy Smith-Mather. Their incredible faith and perseverance changes and challenges us. We meet people working in difficult contexts in South Sudan who feel called to serve their people not matter the conditions, even while they have the option to leave. Their courage and dedication inspire us. It is a privilege to be present and able to ask, how can we join you? We believe in what they are doing, and they credit their bravery and perseverance to God’s grace in their lives. Perhaps these individuals will not receive awards for their work, yet we trust God finds ways to keep them encouraged. Perhaps part of that encouragement comes when a PC(USA) mission co-worker shows up, reminding them the global church supports their efforts. If so, praise the Lord. May God continue to protect them from the bullets they hear pass by and the diseases that may catch them in a rural location without medical facilities. May God strengthen them to carry out what is deep in their hearts. Their lives urge me to be a better follower of Christ.”

In early 2011, the people of South Sudan voted to separate from the Khartoum-based government of Sudan and form an independent country. The same year, the Smith-Mathers moved there to join the ministry of RECONCILE International. Created by the New Sudan Council of Churches, RECONCILE is a Christian organization that works to foster peace and healing in communities struggling from decades of war. South Sudan is the youngest country in the world, but because of the ongoing civil war, many children have never known peace or had the opportunity to attend school.

Because of ongoing violence, the Smith-Mathers moved to neighboring Uganda in 2017 to work with RECONCILE in the refugee camps, now home to a million displaced South Sudanese. While they continue to make trips into South Sudan, they have not yet returned to their former hometown of Yei due to insecurity.

Before the violence reached Yei where they lived, Shelvis served as the principal of RECONCILE’s three-month Peace Institute (RPI). RPI gathers faith and community leaders from around the country and strengthens their skills in resolving conflicts and recovering from trauma. People from rival ethnic groups live together in the dormitory, share meals, listen to one another’s stories and build friendships.

In 2014, Nancy’s role with RECONCILE expanded to include managing a project with three additional PC(USA) global partners: the Presbyterian Church of South Sudan (PCOSS), Across, and the Yei Teacher Training College. The South Sudan Education and Peacebuilding Project is a collaborative effort to address a gap in educational development caused by years the years of ongoing conflict.

The Smith-Mathers, both ordained PC(USA) ministers from the Greater Atlanta Presbytery, were married and took their first ordained calls in Africa. They were assigned to Kenya in 2008 with the PC(USA) Young Adult Volunteer (YAV) program and signed up for an additional year after their initial one-year appointments ended.

The Smith-Mathers both grew up in Atlanta and attended high school, college and seminary together. They are graduates of The Westminster Schools in Atlanta; Furman University in Greenville, South Carolina; and Emory University’s Candler School of Theology.

To watch a video in which the Smith-Mathers talk about their work:

Sovereign Lord, empower us as we pursue your truth in your Word, and fill us with your transformative Spirit, that we might work to overcome discord, injustice and division through your peace, justice and reconciliation. Amen.