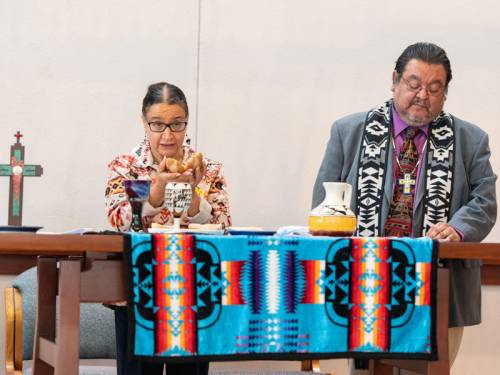 “Let us worship our Creator with minds open to the wisdom of all God’s people, remembering that once listening and respect once had no place in our society.” These were the opening words to the Call to Worship led by Elona Street-Stewart, executive of the Synod of Lakes and Prairies, as staff and guests celebrated Native American Day on Sept. 12 at the Presbyterian Church (U.S.A.) Center in Louisville.

The morning message was preached by the Rev. Irvin Porter, associate for Native American Intercultural Congregational Support. Porter’s sermon, titled “The Place of Beginnings,” was centered around Genesis 1:1–2 and John 1:1–15.

“Creation is the place of beginnings — so much so that John uses it to begin his narrative,” said Porter. “The threefold word in John 1:1 carries us into the depths of eternity, before time or creatures were. Genesis and John both start from ‘the beginning,’ but while Genesis works downwards from that point and tells what followed, John works upwards and tells what preceded — if we may use that term in speaking of what lies beyond time.”

Porter says that Native American Presbyterians worship and serve God uniquely. “As I visit various congregations each year, I am quickly reminded that the Presbyterian Church does not have a corner on how people worship. I heard, at a church on the Navajo reservation, the hymn singing in Navajo, the sermon and Scripture readings also in Navajo and English. This reminds us that God doesn’t just speak English as we were led to believe when our languages were forbidden,” he added.

“We celebrate Native American Day in the Presbyterian Church (U.S.A.) not by default because other ethnic groups are recognized too on their own days,” said Porter, “but to lift up the gifts and cultures that bless the church from 95 Native American congregations and chapels located from the Shinnecock of Southampton, New York, established in 1741, to Point Barrow, Alaska, among the Yupik people, once referred to as Eskimos.”

Porter says that despite difficulties these 95 congregations hold the Light of God alone and they persist. “Even without clergy leadership, they persist. When financial support that has been supporting some of these churches for decades evaporates, the light of God’s people shines out,” he said.

“The light of God’s spirit from Creation of the universe to the 95 Native American congregations is a spirit that is helping the national Presbyterian church understand that they may be small in numbers on Sunday mornings, in Sunday school classes and with meager budgets, but they haven’t let Satan blow out that light and they never will!” said Porter.

Later in the afternoon, Street-Stewart and Porter facilitated a conversation on two key topics related to the Native American community and the Presbyterian Church (U.S.A.) — the Doctrine of Discovery and the Apology to Native Americans, Alaska Natives and Native Hawaiians.

Following an approved overture at the 222nd General Assembly (2016) calling for the PC(USA) and its members to apologize to U.S. citizens of Native American ancestry (both those within and beyond the denomination), the church issued an apology to those of Native American, Alaskan and Hawaiian ancestry for its complicity in the Indian boarding school era of American history from the 1880s up until the 1980s and its impact, including intergenerational trauma and the aftermath felt today.

In addition to the apology, the PC(USA) confessed its complicity and repudiated the Doctrine of Discovery. First articulated in 1452, it authorized and justified the destruction, killing and appropriation of the lands of “non-Christian” people. It gave Europeans domination over America, resulting in indigenous people losing their lands, sovereignty, cultures and lives.

The 223rd General Assembly (2018) also called for establishing a fund to meet the needs for urgent and immediate repairs of the 95 Native American churches and chapels in the PC(USA). Your contribution to the Native American Church Property Initiative will help to further the ministry of Jesus Christ with Native American and Alaskan Native people in the United States. To donate to this fund or for more information, contact the Presbyterian Foundation at presbyterianfoundation.org.

Creator God, thank you for lifting us from shadows of darkness to lives of love, joy and peace through your Son, Jesus Christ. Guide your Native American people as they share the gospel with those in need of you. Grant us your peace. Amen.