Advocating for the powerless

YAV year in Guatemala teaches how to work for peace, liberation and justice

Miriam is a teacher at a public elementary school in her indigenous community in Guatemala. When the government funds for the school hadn’t come halfway through the school year (but had for all of the non-indigenous public schools in the area), she led a march of teachers from their small town in the mountains to the municipal building in Xela, six miles away. Outside the government building, indigenous teachers and parents held a rally and delivered a letter demanding the money allocated for their children’s education.

Miriam was nervous to speak into the megaphone, but she said she knew it was what God wanted her to do because God loves her students. Two weeks later, the money arrived at the school. Miriam is a Presbyterian and was my host mom during my year as a Young Adult Volunteer nearly a decade ago.

It was also in Guatemala that, when I said I wanted to stay longer than my YAV year, someone told me, “If you want to help us Guatemalans, go back home and tell your government to get its boot off our necks.” I was taken aback at first, but I took it as a commandment. 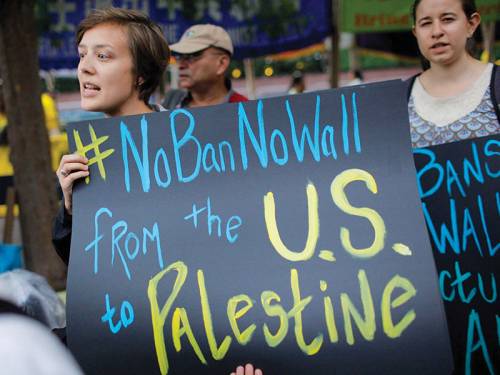 With that commandment and the examples of faith in action that I had seen modeled, I returned home to the U.S. Just a few months later, my attempts to live out the commandment took me to Fort Benning, Georgia, and the movement to close the U.S. Army School of the Americas (now Western Hemisphere Institute for Cooperation) that has trained so many Guatemalan and other soldiers in violent tactics to use against their own people. It was at that protest that I met advocates from the Presbyterian Peace Fellowship (PPF).

In the eight years that I have been part of PPF, I have seen faithful people working for liberation and justice in Palestine and Colombia. Their witness has inspired and nourished me. They have also challenged me to go back home and advocate for the U.S. to stop perpetuating violence by sending military aid that supports brutal governments.

That commandment, given to me in Guatemala and affirmed by so many others, has reshaped how I understand my calling. As a white, upper-middle-class, formally educated, straight, cisgendered, able-bodied, native-English-speaking U.S. citizen, I find that my calling is to listen to and follow people like Miriam — people who speak not necessarily from pulpits, but into megaphones outside structures of power. That commandment has led me to places like Standing Rock and Staten Island and just down the street from where I live in Brooklyn, places where state violence is all too obvious, places where people are crying out for boots to be lifted from their necks.

I feel strongly that my calling is to look for people speaking outside the centers of power, shouting into megaphones, demanding to be treated as the beloved children of God that they are.

Lord our God, may our faith be strengthened. May we be watchful and found faithful at your return. We pray in Jesus’ mighty name. Amen.