Longtime ‘pastor to pastors’ served at PC(USA) church in Maryland 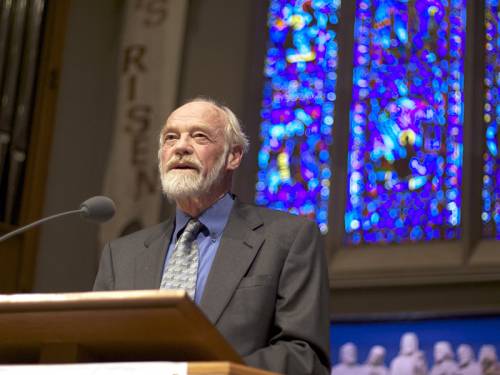 The Rev. Eugene Peterson, a pastor, author and scholar, died Oct. 22 at his home in Montana. He was 85.

He had been hospitalized since early October because of a serious infection, according to his son, Eric Peterson.

In 1962, Eugene Peterson was a founding pastor of Christ Our King Presbyterian Church, a PC(USA) church in Bel Air, Maryland, where he served for 29 years before retiring in 1991. He wrote over 30 books but is best known for The Message: The Bible in Contemporary Language, a paraphrase of the Christian Scriptures that sold over 16 million copies worldwide.

Peterson was born in East Stanwood, Washington, and grew up in Kalispell, Montana. He earned a bachelor’s degree in philosophy from Seattle Pacific University, a Bachelor of Sacred Theology degree from New York Theological Seminary (formerly the Biblical Seminary of New York) and a master’s degree in Semitic languages from Johns Hopkins University. He was also awarded several honorary doctoral degrees.

He retired from public life in 2017 after publishing his last book, As Kingfishers Catch Fire: A Conversation on the Ways of God Formed by the Words of God.

A statement issued by his family on Monday talked about his last few days. “During the previous days, it was apparent that he was navigating the thin and sacred space between earth and heaven. We overheard him speaking to people we can only presume were welcoming him into paradise. … Among his final words were, ‘Let’s go.’ And his joy: my oh my; the man remained joyful right up to his blessed end, smiling frequently.”

Diane Moffett, president and executive director of the Presbyterian Mission Agency, said: “I am profoundly grateful for the life and legacy of Eugene Peterson. He was a gift to the church and the world. His work of translating the Bible into plain language helped increase the understanding of Scripture and its application to everyday life. His unique contribution will live on well past his earthly existence. May God’s peace be with him and his family.”

Peterson’s funeral service was held Nov. 3 at First Presbyterian Church in Kalispell, Montana. A video of the service is available at the church’s website at fpckalispell.org. Expressions of sympathy may be sent to Janice Peterson, his wife of 60 years, at P.O. Box 732, Lakeside, MT 59922-0732.

Jesus, we thank you for being faithful to your calling. We know our society is fractured. Help us today to see you, ourselves, and our neighbors with fresh eyes. May we generously live out of the expanded community to which you have called us. Amen.