‘If God opens a way, no one has a possibility of closing it’ 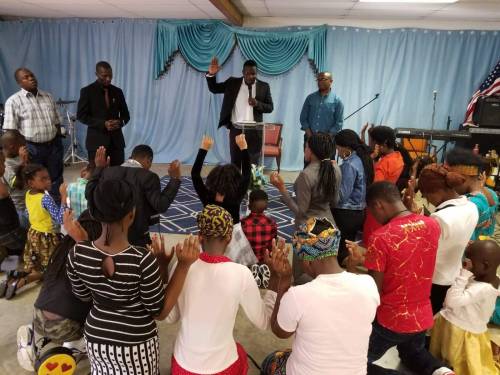 After planting four churches while he was a refugee living in Uganda, Prince Mundeke Mushunju naturally had an eye toward establishing a Swahili- and English-language service when he arrived in Greensboro, North Carolina, three years ago.

The people of Greensboro’s Faith Presbyterian Church — about 70 members strong — were happy to help one of the 1001 New Worshiping Communities, offering the fledgling congregation, El Shaddai Vision Church, both space and encouragement.

“It is not just about the refugee community. We are trying to reach everybody,” said Mushunju, who’s from the Democratic Republic of Congo. “If God opens a way, no one has a possibility of closing it.”

Up to 50 immigrants from Rwanda, Uganda, Burundi and the Democratic Republic of Congo can be found in weekly worship on a good Sunday afternoon. When they can, Mushunju and his wife, Laurette, sing and preach at other churches in Greensboro and around the United States and Canada. They also make trips back to the churches Mushunju planted in Uganda — churches that now hold up to 300 worshipers.

The Rev. Karen Ware Jackson, pastor at Faith Presbyterian Church, said that after meeting Mushunju, she saw pictures of him preaching to thousands in Kampala, Uganda. “I thought, this guy is big time,” she said. “He is an experienced church planter, and he knows how this process works. He is committed to the idea that we don’t come to church to receive. We come to church to give — to be together and receive from one another.”

At El Shaddai Vision Church’s request, Faith Presbyterian Church gave the congregation space in its basement, which came with a kitchen, windows in every room — and no mold, Ware Jackson said with a laugh. Worshipers attending the bilingual service purchased sound equipment and musical instruments, which they leave up during the week. They were given padded worship chairs. “It helps them build the idea they are not worshiping in someone else’s space,” Ware Jackson said.

In addition to leading weekly worship, Mushunju, 34, is a father and a full-time college student who supports his family working full-time as a machinist during the third shift. Once he’s completed his undergraduate studies, he said he plans to attend a Presbyterian seminary.

Soon after arriving in Greensboro, Mushunju began El Shaddai Vision Church in an apartment he was renting. “I had a calling to open a church here. I had been a pastor in Africa for three years, and I wanted to continue that work here,” he said. “Then we started to worship in their building, and we are still there now.

“Pastor Karen has been very open to me. She has a big heart, and she makes herself available any day we need her.”

As services at Faith church began to ramp up in 2015, Mushunju found dozens of people who hadn’t been attending worship because of the language barrier. He said he’s also finding that some people attend for a time, then fall away “because they believe the church will give them anything they want. The reality is different than what they are expecting, so they move around to other churches to see if they can get help.”

Eventually, the El Shaddai Vision Church community wants to open a day care free to refugees. “They don’t go to school because they don’t have anybody to take care of their kids,” Mushunju said. “Day care is a challenge to the community. Maybe God will open a day care for the refugee community and the immigrants.”

Dear Lord, may we respond to your call, taking the gospel into the entire world. Help us to bear witness to your love as we move and do your work throughout the global community. Amen.