‘Student Athlete’ looks at the billion-dollar industry of college sports

When Presbyterian pastor the Rev. Dr. Marcia Mount Shoop saw the premiere of Student Athlete in New York City this past fall, with her husband, John Mount Shoop, she felt incredibly sad — yet hopeful.

“Watching us packing up our house in West Lafayette, Indiana, took us back to a difficult transition in our lives, when we had to leave big-time college football.” 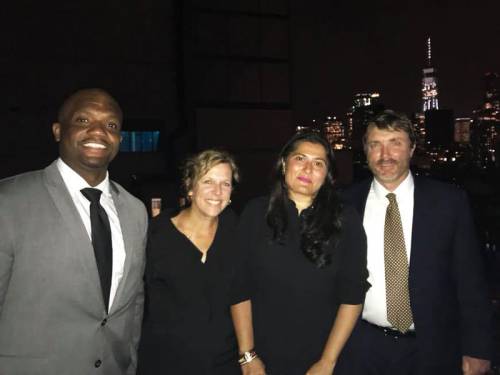 The Shoops’ story of advocating for the rights of student athletes — and of John being fired as Purdue University’s offensive coordinator and then being blackballed from coaching — is one of five stories featured in Student Athlete, which has aired on HBO. The 88-minute documentary is directed by Academy Award winner Sharmeen Obaid-Chinoy and Trish Dalton — and is presented by HBO Sports in association with National Basketball Association star LeBron James.

“LeBron getting involved with his production company was really great,” Marcia said. “He is such an advocate for economic and racial justice — which cuts to the heart of what we’ve been speaking out for on behalf of student athletes.”

“Probably the most troubling scene was seeing Shamar,” Marcia said. “Working so hard all day long and then sleeping in his car at night.”

At Purdue, as the Shoops learned more about traumatic head injuries in professional and college football, they continued to speak out about concussions, sports justice and players’ rights, which they had done at the University of North Carolina in Chapel Hill, as well. They even invited Purdue athletic officials to be part of an event where concussions and sports justice could be discussed. But Purdue wanted nothing to do with the forum because a film that emphasized players’ rights was going to be shown during the event.

“We’re not naïve; we know the National Collegiate Athletic Association (NCAA) and the whole university system is formidable,” she said. “College athletics is a billion-dollar business, with a lot of people — other than the student athletes — benefiting.”

For the Shoops, though, continuing to speak out and advocate for student athlete rights is an act of faith. They believe God has a different vision for student athletes than the exploitation, oppression and economic disadvantage they face as they participate in NCAA revenue-producing events.

When John was coordinator for the Chicago Bears in the National Football League, the Bears had good seasons and bad — going 13–3 one year and 6–10 another year. Marcia would always tell him that “through the good or bad, God was with him.” That used to comfort him, until he became an offensive coordinator in college.

“I saw the corruption, the head injuries, the way coaches were making money off of these young men,” he said. “How they weren’t getting the education they were promised.”

Now that promise that “God was always with him” became a burden.

“I kind of wished I could look away, that I wouldn’t pay as much attention,” he said. “But if you call yourself a Christian and someone comes to you and says they’re hungry, or their family is in need or they’re hurting because a situation was unfair — well, I couldn’t look the other way.”

John hopes that Student Athlete will stimulate a conversation about the economic injustice in the world of collegiate sports — which is what he saw after the premiere in New York. People were getting up in the room and raising their voices. Many were angry over what they saw as both economic and racial injustice.

“Anyone with a moral conscience is going to struggle as they watch the movie — it will be hard to not feel conflicted about their love of collegiate football and basketball,” Marcia said.

“Maybe alumni will say, ‘I want our university to do better.’ If you harness that power, there could be a sense of moral urgency for change.”

Lord, help us to discern your call and to faithfully use the gifts that you have bestowed upon us. We pray in Jesus’ name. Amen.