Connecting to the halls of power

Government relations and advocacy partnerships make a difference around the world 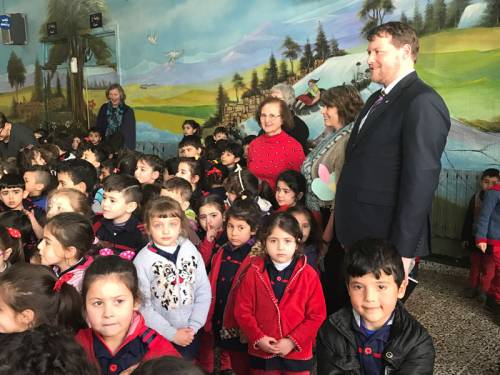 “Never doubt that a small group of thoughtful, committed citizens can change the world; indeed, it’s the only thing that ever has.” — Margaret Mead

In our ministry in government relations and advocacy, the work looks different too. The Presbyterian Church (U.S.A.) maintains two offices — one in New York (Presbyterian Ministry at the United Nations) and one in Washington, D.C. (Office of Public Witness). Both offices advocate on behalf of the policies of the PC(USA) and the needs of our partner churches worldwide.

The Presbyterian Ministry at the United Nations works with the U.N. system and agencies, as well as ambassadors and other diplomats, to create global change. The voices of our partners give us a strong message to share with global leaders. One saying that we repeat over and over again with U.N. Security Council ambassadors is this: “The church is in a country before conflict begins, the church continues to serve the community while a conflict occurs and, God willing, the church will be in the community to help it rebuild after a conflict ends.” This is more than many nongovernmental and humanitarian organizations can say.

The Office of Public Witness advocates with Congress and the presidential administration in partnership with PC(USA) partners around the globe. U.S. foreign policy affects many of our brothers and sisters directly — many times for the worse. The Office of Public Witness brings the experiences of our church partners to the attention of policymakers. It is those partners’ knowledge and experiences of the consequences of U.S. policy on the ground that make the Presbyterian witness in Washington a credible source of information for policymakers. In addition to direct advocacy, the Office of Public Witness educates Presbyterians on key issues that affect our partners and provides the tools that Presbyterians need to do advocacy with their members of Congress and the administration. 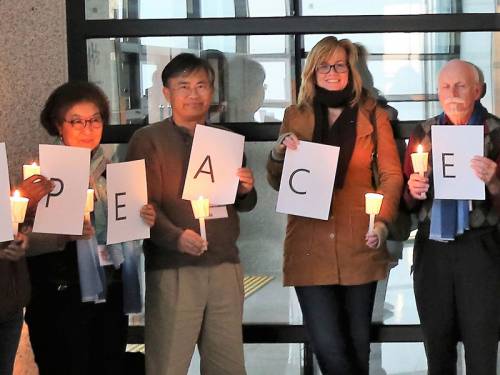 A Presbyterian peace delegation visited the Border Peace School in Korea’s demilitarized zone last November. Left to right: the Rev Unzu Lee; the Rev. Howard Kim; Catherine Gordon, the representative for international issues in the Office of Public Witness; and Earl Arnold of the Presbyterian Peace Network for Korea. Photo by Kathy Melvin

One example of this advocacy work, with the National Evangelical Synod of Syria and Lebanon (NESSL), occurred after the U.S. cut diplomatic ties in Syria. It resulted in the removal of the ambassador and diplomats. During this time, the Presbyterian Ministry at the United Nations met with the U.S. ambassador to the U.N., and we shared information directly from our partners who were in communities affected by the conflict. The U.S. ambassador listened intently to the needs of the Christian community in Syria, and the only U.N. Security Council resolution on Syria included protection of religious minorities.

We also brought leadership from NESSL to meet with representatives from the U.N. Office for the Coordination of Humanitarian Affairs, the Department of Political Affairs, the European Union, the U.S. and Russia. Our access to decision makers allowed our partners’ voices to be heard.

In Washington, the Office of Public Witness leads the Interfaith Working Group on Cuba and has worked to bring several important delegations from the Cuba Council of Churches to meet with Congress and administration officials. These delegations of PC(USA) Cuban church partners were recognized by the Obama administration as a significant factor in their decision to open the relationship between the two countries and establish diplomatic ties. And with the change in administrations, the Office of Public Witness is continuing its work to end the U.S. trade embargo on Cuba.

Our presence and continued advocacy with our sisters and brothers around the globe are a faithful witness for those voices in the halls of power.

Catherine Gordon, Representative for International Issues, Office of Public Witness, and Ryan Smith, Director of the Presbyterian Ministry at the United Nations

Today’s Focus:  Partnerships Around the World

God, your compassion for all your children is reflected in the lives of people in your church. We thank you for their faithfulness as they minister, each in his and her own way, to those around them. Amen.