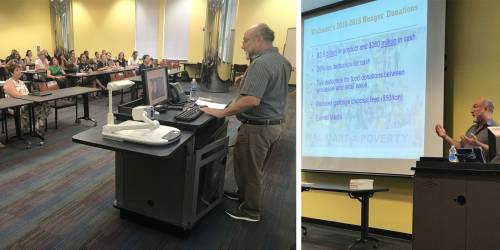 Can million-dollar donations to anti-hunger groups be a bad thing? Should Christians who are called to serve and work toward eliminating hunger and poverty in our community’s question corporate generosity as a viable tool to achieve a goal? Food activist and author Andrew Fisher presented these questions and more at a University of Louisville event on Sept. 4 that was co-sponsored by the Presbyterian Hunger Program. Fisher spoke to an audience of approximately 50 graduate and undergraduate students and a smaller number of community members interested in hunger issues, detailing the “unholy alliance” that exists between corporate America and anti-hunger organizations.

Fisher, who has worked in the anti-hunger field for 25 years and is the author of Big Hunger: The Unholy Alliance Between Corporate America and Anti-Hunger Groups, traces current anti-hunger policies back to the early 1980s, when recession and cutbacks to federal programs in President Ronald Reagan’s administration led to the growth of food charities and  resulted in an emergency food system that became big business.

Andrew Kang Bartlett, the Presbyterian Hunger Program’s associate for national hunger concerns, said that the system of food banks, pantries and meal programs that grew out of that era provided a very compelling cause — lots of people wanted to volunteer and businesses donated substantial amounts of money to help.

“For compassionate people and people of faith, it’s a great draw to be addressing individuals who are hungry in their community,” said Kang Bartlett. “But instead of anti-hunger programs remaining a temporary fix for people experiencing hunger, it became established and the focus rather than addressing the poverty that causes hunger. Unless you address the social and economic problems that cause hunger today, those individuals will be back again tomorrow and so on.” In his presentation, Fisher provided examples of the type of collusion that keeps the hunger industrial complex proliferating in today’s market. Walmart donates massive amounts of money to anti-hunger groups while simultaneously being the No. 1 recipient of food stamps in America. They make $1 in profit for every $5 they take in from the Supplemental Nutrition Assistance Program. 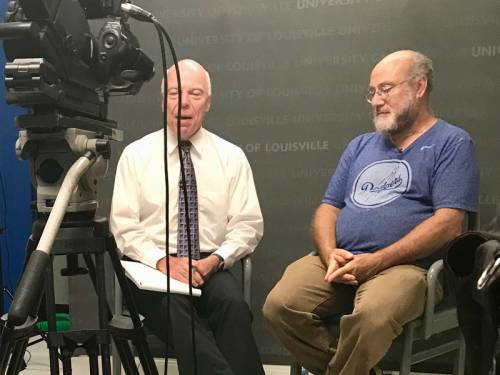 Females, children and people of color are disproportionately hungry and poor, so the Presbyterian Hunger Program also addresses poverty, especially in the U.S. Per Kang Bartlett, the wage issue needs to be raised because people don’t have enough money to afford sufficient and healthy food.

There are more than 60,000 emergency food programs across the country connected to Feeding America, a major hunger-relief organization, and two-thirds of those are connected to houses of worship.

“Clearly Christians are eager to alleviate hunger; it’s throughout the Bible,” said Kang Bartlett. “At the same time, we’re called to work on eliminating poverty and resolving issues that make people poor. Andy Fisher’s critique resonates with us. Like him, we say ‘yes’ to congregations and others around the country that are compassionately, faithfully feeding people and we encourage them through various ways to work on the underlying issues that perpetuate hunger.”

Fisher did note that many food bank and pantry staff are committed to their communities, mentioning the Community Food Bank of Southern Arizona as an example of an organization reinventing the emergency food system in real time. But he’s also seen a downside.

“I was surprised by the racism inherent in the emergency food system,” said Fisher. “As a white volunteer at a food pantry, I became ensnared in the toxic charity trap, acting as a security guard to make sure the clients, often people of color, didn’t take an extra bag of spaghetti or package of hamburger.”

The Presbyterian Hunger Program offers resources for congregations and individuals interested in learning about and advocating for hunger and poverty issues. The Just Eating Bible study explores the relationship between faith and our food. Adult and middle school versions are available in English and Spanish to buy or as a free download.

The Community Food Assets: Taking an Inventory is a way for youth groups or adult groups to take an inventory on who is doing what around meeting people’s needs about hunger and poverty.

Merciful God, thank you for providing for us in your grace and comfort and the place you have for each of us in your house. We pray that you would use us, in advocacy and in ministry, to provide for those living in hunger and poverty in our communities and around the world. Amen.