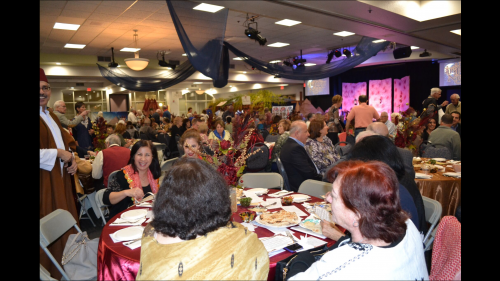 The Rancho Bernardo Community Presbyterian Church is one church with two identities.

Located in San Diego, the church is home to both an English- and an Arabic-speaking Middle Eastern congregation. The Rev. Dr. Mofid Wasef serves on the staff of both congregations.

Not only has the Arabic church grown numerically in this country, but it has extended its outreach to support retired pastors in Egypt. The Agabus ministry, based on Acts 11:28, “One of them named Agabus stood up and predicted by the Spirit that there would be a severe famine over all the world; and this took place during the reign of Claudius,” was started after Wasef took a trip to Egypt and saw firsthand the needs of retired Presbyterian pastors in that country.

His wife, Miral Wasef, said, “Our daughter bought a bathing suit for $90 and my husband helped her realize that people in Egypt could not afford food.” After considering the cost of the bathing suit, their daughter returned it to the store. It was at that time both Wasef daughters started to think of not only the pastors in Egypt but their children as well — and that was the genesis of the PK ministry (Pastors’ Kids).

One evening over dinner, the Wasef family decided to collect a love offering for specific pastors. However, they soon realized that was not enough. They needed to raise the congregations’ awareness of the need of the pastors in Egypt.

Jenny Strater, a member of the English-speaking congregation, invited the Wasef family to her home for dinner. It just so happened that the hostess served on the mission committee with one of the Wasef daughters.

During the dinner conversation, the subject of the Agabus ministry came up and the hostess and guests decided to hold a fundraiser for the ministry. The event would be a dinner featuring Middle Eastern food. Initially, the dinner was going to be held at Strater’s home, but the event sold so many tickets, the dinner had to be moved to the church.

The first Arabian Nights-themed dinner was a great success, with nearly 200 people in attendance. Wasef says Arabian Nights has become an event supported by both the English- and Arabic-speaking congregations.

This year marked the event’s 10th year, with nearly 400 people gathered for dinner and fellowship. The event raised more than $20,000.

“The Arabian Nights event attracts people of all ages,” said Wasef. “You have people in attendance from age three to 90, fully garbed in Middle Eastern attire.” One of the evening’s highlights each year is the performance of the Dabka, an Arabic folk dance.

In addition to the authentic Arabic food served at the dinner, the church and individuals purchase items from business owners in Egypt, Syria, Palestine and other Middle Eastern sources, which are sold at a bazaar during the event.

The money raised during the Arabian Nights events has helped the Agabus ministry grow from supporting 25 pastors at its inception to now supporting about 100 pastors, pastors’ widows and about 15 children of pastors.

The key qualifier for support is that pastors must have financial and medical needs. “This ministry continues to grow and expand geographically,” said Miral Wasef. “It now aids ministers in the southern parts of Egypt.”

“The Arabian nights event shows that no matter where you are or what part of the world you live in,” she said, “we are all one in Christ.”

Dear God, thank you for giving us opportunities to serve — to be your hands and feet — and to share our time, talents and treasures with our neighbors in need. Amen.