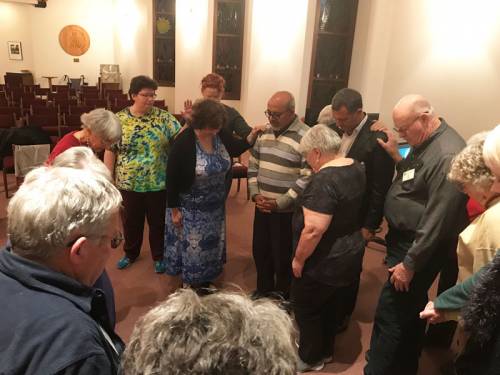 As he and his small church help some of the thousands of Syrian refugees living in Tyre, Lebanon, to learn a trade to feed their families, the Rev. Amir Ishak has adopted the gazelle as the symbol for his innovative ministry.

That’s a reference to Dorcas, whose name is Greek for “gazelle,” whom the Book of Acts describes as “a woman full of good works and acts of charity.”

“She wasn’t a preacher or a musician,” Ishak told about 20 people gathered to hear about his work at St. Andrew Presbyterian Church in Billings. “But she was good at using her needle.”

Ishak and his interpreter, Dani Khayat, appeared in Wyoming and Montana recently as part of a partnership with the Presbytery of Wyoming. Presbyterians from Wyoming churches plan to visit Lebanon and Syria during 2019.

Speaking in Arabic through Khayat, Ishak, 60, who’s spent 34 years in ministry, discussed the unique ministry of the Presbyterian National Evangelical Church in Tyre. He calls his mission outpost “a small church making a big difference. We are rich in our diversity.”

At first, Ishak said, church members tried to help refugees by collecting supplies and simply giving them away. On the arranged day, about 1,800 desperate refugees showed up for help.

“It was scary for me. How do you offer donations for 1,800 people?” he said. “I prayed to the Lord and told him it’s your problem, not mine.”

Police showed up to help distribute aid, and people “were happy with what they got, even though it was simple and humble,” he said. “But we knew they would want something more, and to speed donations we knew we had to do something different.”

A visiting pastor convinced Ishak that refugees might be better served if they were trained to provide for themselves. “This,” he said with a broad smile, “was exactly what I had been praying for.”

That initial offering soon spread to training in hair dressing, cosmetology and crocheting. They also train refugees on counseling and advise people how to open and manage a small business.

The church established a revolving microloan program. A man named Akram, who was suffering from a shoulder injury, got half of the cost of his surgery covered and was able to purchase a motorcycle and a cotton candy machine to open a business. Akram is working on repaying his loan, Ishak said.

A woman named Zozam lost her family to a bomb blast. She arrived in Tyre disabled, “and we’ve dealt with her like she is our daughter,” Ishak said. “We provided her the equipment to learn candle-making, and she’s already covered the loan.”

To date in 2018, 40 people have graduated from the various training courses. The past four years have produced 138 graduates. Each has been recognized and honored during a graduation ceremony.

The children of refugees are cared for as well. Up to 70 children meet for Bible study and to sing hymns. One bright student can recite more than 100 Bible verses, one after the other. “It’s my favorite ministry,” Ishak said.

One student, a boy named Ahmed, died in an accident. Ishak described him as “a boy of prayer,” because his hands were folded, and his head was bowed in virtually every photo that church members took of the children. “His death changed our thinking,” Ishak said. “We started to understand that our humble service among kids was really important.”

Four years into the Ghazala (Arabic for “gazelle”) ministry, Ishak said support from the Presbyterian Church (U.S.A.) “has given stability to our ministry and the opportunity to think about getting bigger and reaching out to more people. I give thanks to the Lord what we can offer these people, and to you for keeping Ghazala moving.”

Blessed Lord, thank you for what you are doing. Bless the children and their families and bring your peace and love to all your people. In your holy name. Amen.