A night of ‘trepidation and enlightenment’ 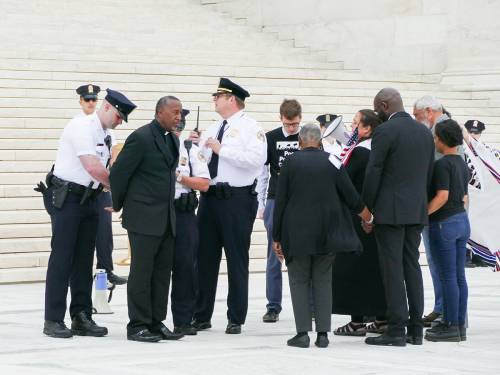 Faith leaders are arrested outside of the U.S. Supreme Court building in June 2018 as part of the Poor People’s Campaign. (Photo by Jessie Palatucci)

The director of the Presbyterian Church (U.S.A.) Office of Public Witness recently found out what life is like behind bars. The Rev. Jimmie Hawkins, along with other clergy, was arrested earlier this summer while praying outside the U.S. Supreme Court Building in Washington, D.C.

The nine were taking part in the Poor People’s Campaign: A National Call for a Moral Revival when they were taken into custody during the peaceful demonstration. Hawkins shared his experiences during the 223rd General Assembly (2018) and described the time as a night of “trepidation and enlightenment.”

“It was fearful, intimidating, desperate and sparse. We were treated no better than animals are treated for euthanasia,” Hawkins said. “A person of Jewish faith was offered pork. I became greatly aware and much more sensitive to what incarcerated men and women undergo. We were chained, isolated and told what to do.”

Once taken into custody, the group of clergy and ecumenical leaders was taken for processing where they were handcuffed behind their backs.

“After they processed us, they took us out to the hallway and had us sit in plastic chairs for five hours with our hands behind our backs. The only time they took the cuffs off was when we had to go to the bathroom,” he said. “Many police officers were standing guard over us as if we were going to run away or do something drastic.”

Hawkins said the officers were cordial, but he felt they were intentionally holding on to the group.

“After five hours, they put us on a van, still with the handcuffs on. The van had a partition in the middle and the space we had was approximately 3 feet wide and probably 4 feet high. We were handcuffed in the front and they also had a seatbelt around us. It was the most confined I had ever been in my life,” said Hawkins. “When they shut that door, five of us were on one side, and we could hear the others on the other side of the barrier. We couldn’t see them, though.”

Upon arrival at the detention center, Hawkins said they were once again processed with photos and fingerprints and then sent to jail, two per cell.

“The jail cell was approximately 5 feet wide and 7 feet long and 7 feet high, all metal. Metal toilet and seat and the bunks were metal as well. No bedding, no pillow, nothing. Roaches were everywhere,” he said. “Every time someone would kill a roach, you could hear it throughout the place. People were leaning up against the sides of the walls. All the males were in one wing and of course you could hear all of the conversations.”

At approximately 6:30 the next morning, the group was taken from the cells in handcuffs and ankle shackles for a 10-minute ride to the courtroom for arraignment. The group was brought into a waiting room with up to 40 others, most being held on misdemeanor charges.

By 4 p.m., the group was moved to the U.S. District Court, where they remained in the custody of federal marshals.

“It was getting so late, we thought we were going to have to spend another night in jail,” said Hawkins. “But we were finally given a court appearance and released.”

Under the judge’s orders, the detainees must call each week to the pre-trial office and their passports are being held until after trial. They are also not allowed within five blocks of the Supreme Court Building except for work. The Office of Public Witness, where Hawkins works, is across the street from the court.

The group, which included the Rev. Dr. Liz Theoharis, a Presbyterian pastor and co-chair of the Poor People’s Campaign, is expected back in court on July 2 to set a trial date. If found guilty, they face up to 60 days in jail and a $5,000 fine.

Father, we give you thanks for your blessings and ask that you teach us to share with those who have nothing. We know that you can convert the little that we have into a rich abundance to benefit those who suffer. In the name of Jesus. Amen.