Both sides on fossil fuel divestment issue look ahead, post-GA

For hours, Fossil Free PCUSA representatives lay scattered across the floor outside of the convention hall at the 223rd General Assembly (2018) in St. Louis. The “die-in” was in response to the commissioners’ decision to accept a minority report asking the Committee on Mission Responsibility Through Investment (MRTI) to continue its engagement with fossil fuel companies.

Fossil Free PCUSA, a project of the Presbyterian Peace Fellowship, had spent the past two years generating support for divestment across the country. In the two weeks prior to GA223, the group walked more than 200 miles from Louisville to St. Louis to raise awareness of the issue.

“I wish that the denomination had listened to the frontline communities in the 40 presbyteries who had called for divestment from fossil fuels,” said the rev. abby mohaupt, moderator of Fossil Free PCUSA (who prefers that her title and name both be lowercase). “We are still committed to work for creation and for categorical divestment from fossil fuels in the PC(USA).”

For years, MRTI leaders have said that continued engagement with fossil fuel companies is the most effective way to generate change. By a 332-178 vote, GA commissioners agreed. MRTI has been directed to evaluate all companies it works with, giving special emphasis to several corporations with large greenhouse gas emissions, such as Phillips 66, ExxonMobil, Chevron, Marathon Petroleum, Duke Energy, Ford and General Motors.

“The vote solidifies our work plan for the next year, and there are a series of companies that we will focus our engagement,” said Joseph Kinard, MRTI Committee chair. “Being at the table is very critical. We have an opportunity to speak truth to power, not only on the streets but in the boardroom. We hope FFPCUSA representatives will help connect us to their frontline partners and help us be their conduit to the corporations.” 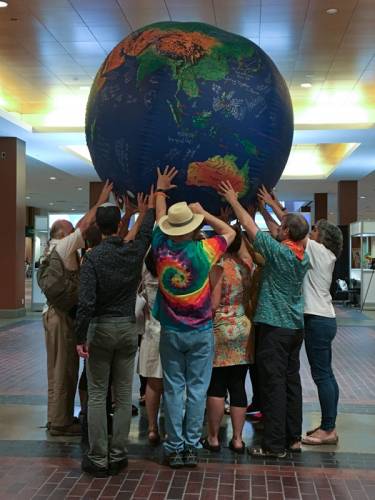 Mohaupt says Fossil Free PCUSA and its supporters will continue to pray and regroup on the issue.

“We continue to believe in radical hope without too much anger,” she said. “I would hope more presbyteries would come forward next time.”

“Their voice is so critical in this global movement. We’re bringing about pressure from multiple angles in order to truly impact change,” said Kerri Allen, MRTI Committee vice chair.

Rob Fohr, director of the church’s Office of Faith-Based Investing and Corporate Engagement, said the vote provided a clear direction and goal.

“The assembly affirmed the metrics that we spent two years working on,” said Fohr. “If companies aren’t moving in the right direction, MRTI will know it and will put those companies in front of the General Assembly to consider divestment.”

“Now that we have Climate Action 100, we have an even stronger voice,” said Kinard. “We are listened to and are able to leverage that kind of involvement into discussions on other issues.”

Climate Action 100+ is an initiative led by investors to engage with the largest greenhouse gas emitters. It works toward improved governance on climate change and reduced carbon emissions.

Fohr, Kinard and Allen say they have seen how engagement has already made a difference with the companies in MRTI’s work plan.

“We’ve seen that kind of action not only in fossil fuel companies, but with other companies we’ve been engaged with,” said Allen. “We are dealing with multiple justice issues where we are seeing action quickly. Now we’re seeing a larger collaboration than we’ve ever had before.”

Lord, help us as we seek to be good stewards of your creation. May we glorify you in all we do. In Jesus’ name we pray. Amen.