Volunteers stretched thin after years of hurricanes, wildfires and flooding

Strong hurricanes, record flooding and massive wildfires have taken their toll on volunteer groups aiding in cleanup and recovery in recent years. Presbyterian Disaster Assistance says groups have been working hard to help communities rebuild, but the number of powerful hurricanes and other natural disasters is making it harder to find enough people to meet the need.

“Hurricanes Katrina, Rita and Wilma in 2005 really touched people’s hearts, and groups and individuals showed up in masses to help. That was 13 years ago,” said Jim Kirk, PDA’s associate for national disaster response. “Over the years, volunteers went back 10 to 15 times to assist with cleanup and rebuild, and now they’re aging out. Back then, they were in their 60s and had a lot of time and energy, and now they’re in their 70s or 80s.” 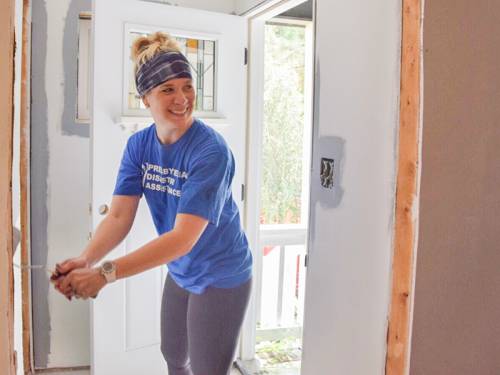 Kirk said that between 2013 and 2015, the number of volunteers dropped. But in the last two years, there’s been uptick again. Even with the upswing, though, he said there is still a great need.

Just in response to the hurricane season of 2017, PDA opened 10 new volunteer host sites — four in Texas, four in Puerto Rico and two in Florida. “We haven’t seen that many open in a short time since Superstorm Sandy. That’s significant. We are in conversation now to open up an additional half a dozen,” he said.

Keeping the centers full is challenging. In Florida, fewer centers were opened last year because many were still in operation from Hurricane Matthew in 2016.

“We are still responding to disasters that occurred in the last two or three years. People are still going to North and South Carolina for Hurricane Matthew/flood recover, Gatlinburg, Tennessee following the wildfires two years ago, Florida with Hurricanes Hermine and Matthew damage, and Louisiana with horrific flooding in 2016,” said Kirk. “When something new is on the radar, people want to go, and it draws volunteers away from established sites.”

Long-term recovery organizations like PDA work with volunteers at every skill level.

“The more skilled the volunteer, the better. In the early stages of disasters, we just need warm bodies with strong backs because there’s a lot of muck and gut which can be done with little supervision,” said Kirk. “But as recovery moves on, the level of skill required increases. We have space for everybody right now.”

Gracious God, we thank you for the faithfulness of your servants who seek opportunities to serve one another. We ask you to bless their generosity and multiply their impact. In Jesus’ name. Amen.