Closing churches due to size unthinkable in Cuba 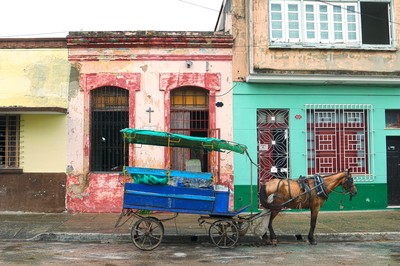 A horse cart from a distribution center next door sits in front of the Presbyterian Mission in Camagüey. (Photo by Randy Hobson)

The mission started in 1995 or 1996 — members aren’t entirely sure — and has persisted in a city that is dominated by many large Roman Catholic churches. “We are special because of the attention we pay to each other,” said Elier Perez, who joined the mission recently. “Most of the people live right here in the neighborhood, and so we are very connected to each other.”

Though the mission has no pastor, it does not lack for leadership. Kenie Suarez, a professor of architecture at the local university, and Reinier Rodriguez, who works for Camagüey’s department of history, are a married couple who found the Camagüey Mission while they both worked at the university. Suarez grew up Methodist and Rodriguez Roman Catholic.

They have been part of the mission for six months, after trying the Episcopal church in town. 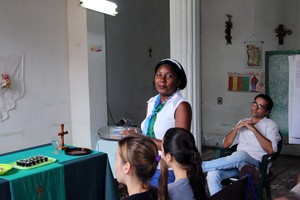 “We changed because of the Presbyterian form of government,” Rodriguez said. “The Episcopal Church is a little closed, and we both wanted to pursue some theological studies and work.” Rodriguez has been encouraged by the Rev. Edelberto Valdes, IPRC general secretary, to enroll in extension courses offered by the Evangelical Theological Seminary at Matanzas (the IPRC’s seminary) to prepare for pastoral ministry.

“I am interested in becoming a pastor,” Rodriguez said. In the meantime, he and Suarez help provide leadership for the Camagüey Mission. Services are held in a small room on a narrow neighborhood street, where the congregation has to compete with loud buses, motorcycles, yelling, talking, laughter and the clip-clop of horses pulling carts.

“[Worship] here is a special moment,” Valdes said, “but it is not separated from real life.”

Services are held regularly on Sunday mornings, usually on Friday evenings, and “whenever we feel the need,” Suarez said. The service for a visiting delegation from the PC(USA) took place on a Tuesday at 4 p.m., with most of the mission’s members present. The service included the sacrament of the Lord’s Supper.

Worship and mission “on demand” seems to be a hallmark of the Presbyterian Mission in Camagüey. “We need to grow in faith and members,” says one member, echoing sentiments voiced by many PC(USA) Presbyterians. “We don’t want to be satisfied by what we have now.”

God, you go with us and sustain us. Thank you for those with a strong faith who seek your will in their lives. Bless them and the stories they have to tell. Encourage, comfort and make your presence known through the peace of Jesus Christ. Amen.