From church conflict to church building

By addressing per capita and embracing its ethnic pastors, Nevada Presbytery experiences growth 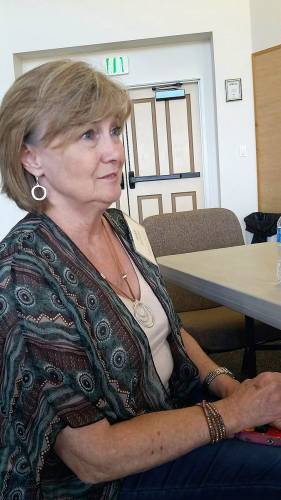 Stated Clerk Joan Jeffers has helped change the environment of the Nevada Presbytery where half of it’s congregations are now experiencing growth. (Photo provided)

It’s a far cry from 2014 in the Presbytery of Nevada. This past year 12 of its 21 congregations experienced numerical, and spiritual, growth.

Just a few years ago, churches were leaving the presbytery and the remaining congregations were resistant to paying per capita.

“We decided they didn’t appreciate the value of the presbytery,” said stated clerk Joan Jeffers.

So, the board of trustees decided to distribute funds from the four dismissed churches by giving each remaining congregation $1,000 to use for projects important to the church. The only catch was that the money had to be used on something the churches thought would bring growth.

Eventually, bigger projects were funded, such as painting the historic church in Virginia City, replacing a church roof in Elko, establishing a media program in Henderson and restoring antique stained-glass windows in Lamoille.

“It definitely changed the environment,” Jeffers said of the effort. Around that time, she also hired a staff pastor, the Rev. Hilda Pecoraro, to help make personal connections to the presbytery that covers all of Nevada and the eastern edge of the Sierra Nevada mountain range.

Because of geographic distance, the presbytery gathers only twice a year as an assembled body. In 2015, at one of those four-day gatherings, Jeffers made another decision.

The presbytery had three new worshiping communities led by ethnic pastors who, Jeffers said, “had a glow for Jesus.” So, she asked them to start the presbytery meetings in prayer in their own languages and then have it translated into English.

“There was something about hearing their sincerity, love and appreciation for Christ,” said Jeffers. “They’ve helped us remember what we’re supposed to be about.” 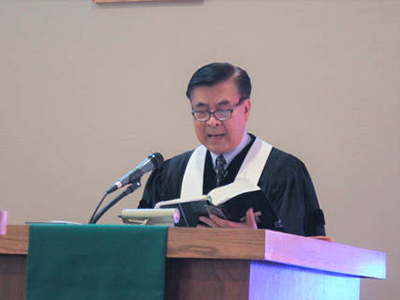 The Rev. Dr. Prachaub Dechawan, pastor at First Thai Laotian, has also presided over communion at Presbytery meetings in his own language. Being able to invite other Presbyterians to come to the table in Thai has made him feel more accepted as “part of the big body of Christ” and more at home.

“We are all working for Christ’s glory,” he said. “Reaching more people to come to Christ. You can see it in people. Everyone is happy to have full membership in the PC(USA).” Dechawan, First Filipina-America pastor the Rev. Mariano Ordonez and Taiwanese-American pastor the Rev. Paul Chen are now reaching out to Vietnamese, Cambodian and Indonesian immigrants in the greater Las Vegas area to help them start fellowship groups in hopes that they might eventually become new worshiping communities and then chartered congregations as they did.

“We want to reach those newly immigrated in the U.S.,” said Ordonez, “to help them as they adjust through the fellowship and love of church. We are their support group.” 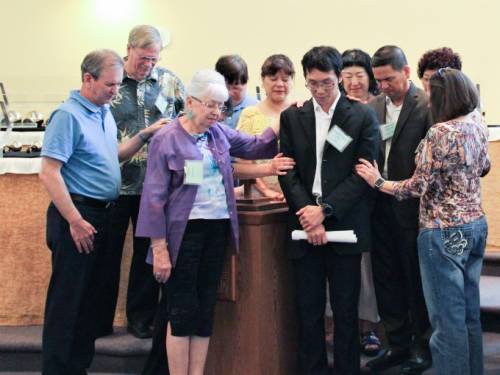 Presbytery members pray for worshiping community Taiwanese-American after a committee was formed this year to help it become a chartered PC(USA) congregation. (Photo provided)

Ten years ago, as fellowship groups, the three ethnic pastors were invited to meet with the Rev. Dr. Carol S. Wood (who retired in 2011) at Westminster Presbyterian Church in Las Vegas. Eventually, Westminster shared its building space with First Thai Laotian. When Dechawan created a homeless ministry that helped move people off the streets, other churches began to partner with ethnic fellowship groups.

“Through Prachaub’s ministry we saw men go from living in the bushes to running their own business and women coming out of prostitution,” says the Rev. Jim Houston-Hencken of Grace Presbyterian Church in Las Vegas.

“Because of the Gospel. That’s when you see the glory of God.”

Now Grace, the second-fastest-growing church in the presbytery, shares its building with a Sudanese fellowship and with Taiwanese-American until it finds a new home after it charters.

“Pastor Paul [Chen] speaks languages I don’t,” he says. “As Anglos, there’s no way we could’ve done this without their [the ethnic pastors’] help.

“It took a few years, but we’ve gone from church conflict to church building. It’s really a spirit of God thing.”