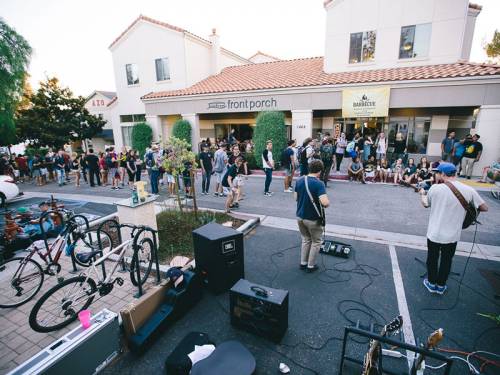 Sitting right next to the entrance to Cal Poly, Front Porch coffeehouse became the place for students to process and grieve when racially insensitive photos surfaced at the university. Photo courtesy of Front Porch ministries

When racially insensitive photos surfaced at Cal Poly University in April, Front Porch, a coffeehouse and 1001 worshiping community in San Luis Obispo, California, began to engage students — the majority of whom were disgusted by what they saw.

Front Porch, which is owned by Santa Barbara Presbytery, is next to the entrance of Cal Poly. Thousands of students walk by Front Porch every day, with some 500 dropping in for free coffee and conversation.

“We became the place for students to process and grieve,” says Front Porch ministries director Joel Drenckpohl. “Every day, all day long, every conversation, in my office, in the coffeehouse and in walks with students, was based on issues of race.”

Those daily discussions spilled over to Wednesday nights, where more than 250 students come together for a meal. The only requirement is that they get to know each other and discuss hard topics. 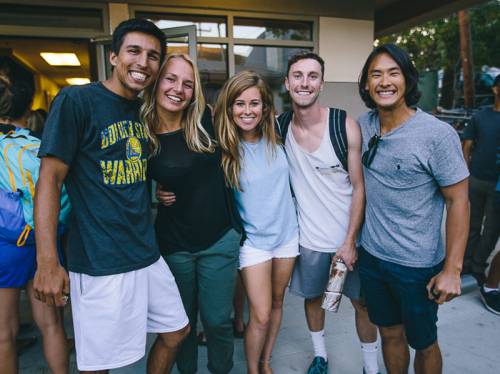 Front Porch has encouraged Cal Poly students to recognize each other’s humanity first, as a prerequisite for listening to and appreciating their differences. Photo courtesy of Front Porch ministries

As the conversations about race deepened, the students began to grasp that they wouldn’t truly be able to listen and celebrate each other, or their differences, until they recognized each other’s humanity.

According to enrollment data, Cal Poly is the “whitest public university” in the state. Nearly 55 percent of the 20,000 students are white, 16.7 percent are Latino and less than 1 percent are black.

Drenckpohl says it isn’t just the African-American community on campus that feels like they’re not known, or being heard, but also the Latino community — and those in other categories.

University President Jeffrey Armstrong — who indefinitely suspended all Cal Poly fraternities and sororities after the Sigma Nu photo appeared with the caption “when you get he [sic] holmes to take photo of la familia” — recently attended a breakfast at Front Porch to hang out with students and listen to their spiritual concerns.

With Drenckpohl being invited into a wider university conversation regarding the future of spirituality on Cal Poly’s campus, Front Porch is beginning to dream about how they might further influence the campus to become a healthier community.

Opened as a state-of-the-art ministry facility in 2004, it was originally envisioned as a place where students at Cal Poly who identified as Christians could create community with Presbyterians.

But when Drenckpohl arrived at Front Porch in 2013, only around 30 people were using it — and fewer than 100 on campus knew it existed. The first thing Drenckpohl did was push a new vision with the core group of students who were using it.

“The gospel should never be just for Christians,” he said. “It should benefit everyone — regardless of whether they’re going to build their lives around it or not.”

Gradually Drenckpohl’s philosophy of ministry began to reshape Front Porch. Instead of talking about big theological ideas, they started paying attention to those walking past them every day. The goal was to build relationships, not because they had an agenda to convert people, but because they were fellow human beings loved by God.

Five years later Front Porch has a core group of 120 volunteers — of both faith and non-faith backgrounds. Most consider themselves spiritual, but do not necessarily identify as religious.

And Front Porch now more fully represents the journey Drenckpohl has been on — out of the ghetto of Christianity and into a place of awareness that recognizes the humanity of one’s neighbors.

“This generation is fed up with religion,” he said. “They’re tired of how God has been presented to them, which seems to be opposite of who Jesus was.

“Daily, I have students — Christian, Jewish, Atheist and Muslim — tell me Front Porch is the most life-giving thing they’ve ever been a part of.”

Compassionate Christ, Lord of all people, races, colors and creeds, give us compassion to see the other, courage to cross over the barriers that separate us from one another, and commitment to live lives worthy of your calling. Amen.