‘It’s like they wanted to throw money at people’ 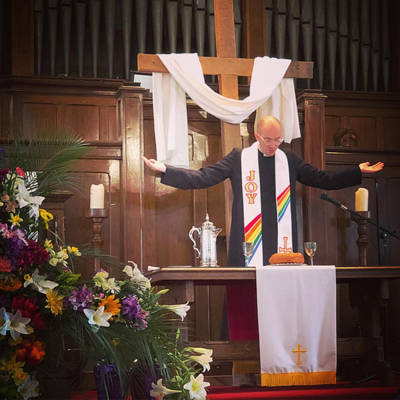 He was 24 years old. Stanger had a 10-year plan to pay it off, but by 2016, after a year of Young Adult Volunteer service and three years of living and working in New York City, he was sensing God’s call to serve as pastor at United Presbyterian Church in Lebanon, Kentucky. But he wasn’t sure he could make it work financially, because at half-time he wouldn’t make enough to pay on his student loans debt — and would have to take on more interest.

Through Presbyterian Mission Agency’s loan forgiveness for pastors, he found out that pastors serving PC(USA) congregations or worshiping communities with no more than 150 members can receive up to $25,000 of loan assistance over the span of five years.

“It was so great,” Stanger said, “to have $5,000 a year that went directly to pay off the principal on my loans, made it possible to serve where I was being called. Without this program, I wouldn’t have been able to.”

Stanger, who is now a family therapist — in 2019 he received his Master of Arts in Marriage and Family Therapy from Louisville Presbyterian Theological Seminary — received $15,000 in loan assistance over the three years he was at United. That, along with the COVID-19 CARES Act, which pauses student loan payments and reduces interest to 0% through the end of the year, motivated him to pay off the rest of his loans in full.

“It’s a real gift, and liberating,” he said. “It’s such a privilege to have them paid off.” Stanger knows he couldn’t have done it without the help he received from Mel Tubb, associate for Financial Aid for Service. Tubb bent over backwards, he said, to get people like him to apply. And having worked in the nonprofit world in New York, he was amazed at how easy it was to apply for assistance.

“Sometimes there so many pages to fill out that it’s more work than it’s worth,” he said. “But theirs is so simple. It was one page — like they wanted to throw money at people.”

God, you call us to proclaim good news in word and deed. Grant us courage to be brave, bold and imaginative disciples in all we say and do. In Christ’s name. Amen.