What prevents your organization from being antiracist? 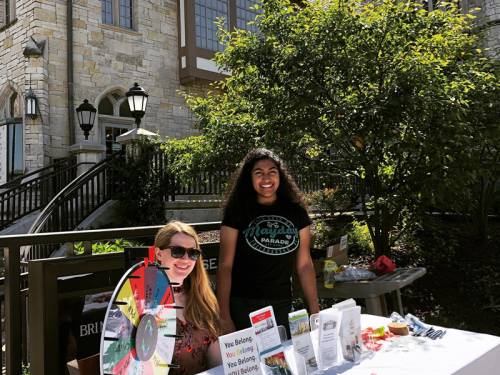 In an effort to recruit students last year, Shaniya Auxier, at right, is pictured in front of the Pres House at the University of Wisconsin. (Contributed photo)

The antiracism training event came together after many campus ministers told UKirk executive director Gini Norris-Lane that in light of George Floyd’s murder and the killing of Breonna Taylor, they — and many students — wanted to speak out against racism and white supremacy.

When the Office of Christian Formation heard their desires, associate coordinator Stephanie Fritz helped UKirk, a member of the Christian Formation Collective, by providing funding for the event. Norris said the office also them helped plan and organize the training and develop campus minister cohorts — one of which is working on dismantling systemic racism.

As co-trainers for the event, Pickrell and Busch are part of a cohort of about 20 racism trainers from The Open Table, a worshiping community in Kansas City, Missouri. The two were paired to work with UKirk because of the training experience they have around what UKirk wanted and needed.

“This is more than just training for me. It’s a calling,” Busch said. “I have a husband, a father, a brother and uncles who any day could become the next dead victim on the local news due to the ‘everyday’ of racism.”

Nii Addo Abrahams, associate director of campus ministry at the Pres House, said on the surface, the university in Madison, Wisconsin, is located in a nice progressive community. But by digging below the surface, Abrahams said, one will find deeply entrenched racial disparity around imprisonment and the policing of young Black kids.

As a 26-year-old Black man who doesn’t want to have to worry that if he looks at someone the wrong way or runs a stop sign that it might be his last day—leading a predominantly white campus ministry energizes him. Aware that many students may have never had a relationship with anyone who wasn’t white, Abrahams tries to help them make connections to how harmful racism is to their own growth and faith journeys.