Shining light in the darkness 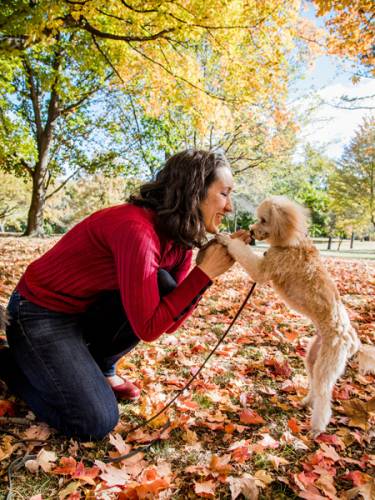 Pet therapy has been an important piece of the Light for the Darkness ministry. The Rev. Thirza Sayers’ dog assists in community groups and brings a certain ease to the atmosphere. (Photo by Neil E. Das)

From February through April, the Rev. Thirza Sayers was in bed, in another space of darkness.

The leader of Light for the Darkness, a new worshiping community that serves as a mental health ministry in the Presbytery of Giddings Lovejoy and pastor at Hillside Presbyterian Church in House Springs, Missouri, has lived with treatment-resistant major depressive disorder and generalized anxiety disorder for 30 years. Then came post-traumatic stress disorder. This combination, treated with 20 Electroconvulsive Therapy sessions, sidelined her from 2013 to 2017, when she took mental health disability leave.

When Sayers reemerged, the founder of what was then Caritas, the Rev. Dr. Johanna McCune Wagner, invited her to start leading groups for people with mental health variances. Then in 2019, Wagner received a call to pastor First Presbyterian Church of Concord in California.

“She told me, ‘Either you’re in charge or it’s finished,’” Sayers said.

She rebirthed it and named it according to the mission they were going to follow found in John 1:5: “The light shines in the darkness, and the darkness did not overcome it.”

Light in the darkness is what Sayers experienced this year in her illness, she said. Her psychiatrist took her off the four medications she was on in case she was reacting to one of them. Physically limited, she was unable to do her yoga or bike, which were crucial elements to maintaining her mood.

“So often I felt God was absent in the darkness of 2013 to 2017,” she said. “But God was with me this time. I had learned where to look for God. And I stayed connected and asked for help from friends, family and community, which was essential in not letting the darkness overwhelm.”

They responded to her cries for help by walking her dog. Sending cards. Cleaning her house. Bringing meals. Chauffeuring her to doctors — and praying.

“It was as if God was in the flesh,” Sayers said. “They were doing these things as Christ’s body.”

For Sayers, this is what Light for the Darkness is about. Helping each other with “glimpses of light.” Reminding each other that God is in fact present, where hope lives and grace abounds.

Because the Presbytery of Giddings-Lovejoy was spotlighting its NWCs, presbytery leaders asked Sayers to produce a brief video about Light for the Darkness. Coincidentally, Sayers needed a video that she could use to introduce the group via social media to people looking for spiritual mental health recovery.

So, members in the Light for the Darkness community offered their voices, including Pat, who’s been diagnosed with schizophrenia. Watch the video here.

“Pat and some others thought his part might have been an estranging, but I thought it was important too that we have good representation of the spectrum,” Sayers said. “Pat actually helps destigmatizes it and creates more awareness.”

Light for the Darkness also has a video called “The Coming of the Holy Spirit.” Watch it here.

Last year, as the pandemic was raging, creating a video was a way for Sayers to bring a glimpse of light into the darkness in another way, sharing the creativity of her gifted friends, some of whom were struggling to find work. They included the videographer, the composer, the fire artist, the visual prayer artist and the narrator.

God, how grateful we are for the creative presence of your Spirit. For all that speak of your salvation, we give you thanks. Continue to breathe life into all of us — send us into our neighborhoods and communities in service, so that the world you love might bless your name. Amen.