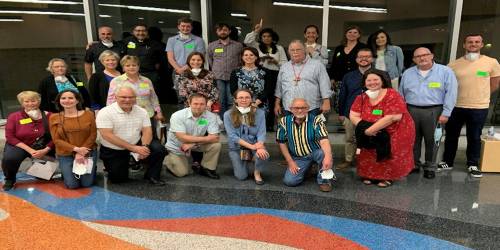 In April, the Border Patrol transferred an average of 653 unaccompanied minors per day to the U.S. Department of Health and Human Services (HHS), a marked increase from the 369 daily average for March, according to government data.

So, on March 18, when more than 2,000 migrants ages 13–17 arrived at the Kay Bailey Hutchinson Convention Center in Dallas,  the arrival made headlines.

Under the direction of several federal agencies and contracted service operators, Catholic Charities of Dallas was tasked with providing volunteers and spiritual care including worship service for the boys at the center.

“The presbytery asked Joanna Kim, Director of Church Services, who grew up in Argentina, to put together a Spanish-speaking worship team to serve in up to three Sundays in March, April and May,” said the Rev. Jesse González, pastor of Iglesia Presbiteriana Getsemaní in Fort Worth, Texas.

The Presbytery Council decided to dedicate the offering of the first-ever presbytery stated meeting since the pandemic shutdown to the ministry with migrant teens.

“Joanna has provided a wonderful leadership, not only in putting together the worship teams but also enduring endless meetings, contacts, emails with Catholic Charities, FEMA (the Federal Emergency Management Agency) and HHS about constant schedule and conditions changes as well as with all the safety regulations and clearance restrictions (background checks, vaccination, no pictures, no press statements, etc.) for participating clergy and laity,” González said.

“Putting together a Spanish order of worship service and music on such short notice required Zoom conversations, many emails and phone calls to ensemble musicians and liturgists. It was a huge task.”

González added that in both worship services, the teens have been very responsive and appreciative of the services put together by the Iglesia Presbiteriana Getsemaní worship teams.

“Music, prayers, Scripture readings and sermons/reflections in Spanish have made both an impact on them as well as motivated them to connect with the liturgy with sincere enthusiasm,” he said.

“It has also been a mutual blessing. We have blessed them, and they have blessed us a lot more. The teens have been very respectful, polite, engaging and well behaved. Speaking for myself, in both visits it has looked to me as a Youth Quake or convention, kind of a Presbyterian Youth Triennium.”

Worship music leader the Rev. Paul Demers expressed these reflections on the worship service: “When the preacher begins to speak, the boys cheer, their responses continuing to echo his calls. I can’t understand much of what he’s saying, though I desperately wish I could. In this small way, I catch a glimpse of the culture shock that awaits these boys.”

“After praying the Lord’s Prayer, we sing a closing song and receive a benediction. But one benediction is not enough. The boys swarm Rev. Gonzalez, asking for prayers and blessings and rosaries. They hold up their name tags, reminding us all that their lives matter,” Demers said.

God, thank you for the ripple effect on lives when we engage Scripture. Continue to encourage us “to take hold of life that really is life.” As we learn to share our faith and serve our communities, teach us how to be the church “rich in good works, generous and ready to share.” Amen.