Bluebirds find a home in a church garden 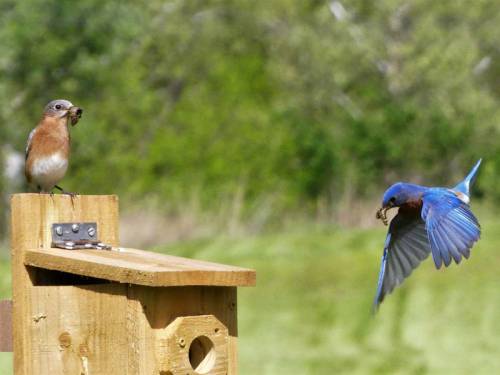 The Eastern Bluebird population was once declining, but with a little help from others ­— such as the congregation at the Presbyterian Church of Washington, Missouri — they are now thriving. These birds have found a place to call home in the church’s garden. Aneeta Brown

The Presbyterian Church of Washington, Missouri, likes bugs — outdoors, that is. So much so that Jolene Patterson, described by many in the congregation as the “capable and creative” chairman of the mission committee, recently wrote and obtained three grants to fund an expansion of the church’s mission garden. The garden was started about six years ago by longtime member David Brunworth, a recently retired family physician. As all gardeners know, larger gardens attract more insects — and more insects mean more birds. That’s the short story of how the Eastern Bluebird discovered one lone nesting box in the church’s backyard.

The bluebirds were in no hurry to visit the church. Founded in 1850, the downtown congregation moved to its current location at the edge of town in 1993. The property, which once produced corn and wheat, comprises 11 acres. Its neatly mowed backyard is spacious enough to contain at least two regulation-size football fields. Dozens of hardwood and pine trees make a picturesque landscape. Yet, except for an occasional worship service on the church’s patio and a few Vacation Bible School activities, the well-maintained property was largely ignored.

Brunworth’ s vision of a mission garden took root with a few small plots stationed near the patio. Soon, a few yards away from those small plots, four raised beds, each 40 feet by 3 feet, were added. Assisting Brunworth with planting, weeding, watering and maintenance was Steven Sebastian, a new church member who retired after a long career as a golf pro. The garden proved bountiful. By fall’s harvest, church members had gathered approximately 700 pounds of Yukon Gold potatoes, sweet potatoes, tomatoes, green beans, spinach, and lettuce as well as 500 banana peppers and 50 bell peppers. Every ounce of it was donated, most of it to the town’s food pantry.

Amid all the planting, weeding, and harvesting, Brunworth and Sebastian were looking to add another mission project to the garden: that of attracting and providing a refuge for the Eastern Bluebird, a species once as common as the robin. The men placed a simple bluebird box near the edge of the garden. To their delight, and the delight of those who worked the garden beds, the blue-feathered birds with their rosy breasts came, feasting on a buffet of insects.

Presbyterian Church of Washington, Missouri, member, Kathy Rogers, appreciated the addition of the bluebird box near the garden. “I had one at my house, but the bluebirds wouldn’t come. The houses in our neighborhood must be too close together,” she said, noting how bluebirds need their boxes to be distanced from one another. In addition to being treated to seeing the birds flutter about, Rogers has enjoyed getting her hands dirty and working in the garden. “It is a good way to get better acquainted with members I don’t know,” she said.

The beaks and feet of Eastern Bluebirds are not strong enough to dig out nesting homes, so they reuse cavities created by bigger birds. According to Zimmerman, human-made nesting boxes provide better protection from the weather and predators than trees do. A proper-sized entrance hole keeps out starlings, and the absence of a perch detracts sparrows. Nesting box blueprints and material recommendations are available for free on many websites.

As they worked in the mission garden, Brunworth and Sebastian were confident that the church backyard would be a good habitat for bluebirds. Actually, it was the ideal habitat. Bluebirds like open spaces near trees as well as meadows, orchards, gardens and pastures. And so, a bluebird box was erected. Everyone kept an eye on the box hoping for feathered tenants to move in. Finally, the bluebirds arrived at the church in late April 2020.

“It was exciting and encouraging,” said Brunworth’ s wife, Diane. She was working in the church garden when she noticed bluebirds flitting around the nesting box. They were building a home. Three eggs were laid and hatched. At least six adult bluebirds collected food for the healthy trio. Another member of the church documented the bluebird activity by taking photos over a 15-day period. And much to the bluebirds’ surrogate church family’s relief, no predators — cats, raccoons or snakes — harmed the nestlings.

God of grace and mercy, we give thanks for the opportunities you give us to join in your care of all who are in need. May your Spirit inspire us as we serve in the name of Christ. Amen.