“People sometimes look at 20-to-40-page reports on energy, tax policy or end-of-life issues and ask, ‘Do you have something shorter?’ Well, the ‘Social Creed’ is that concise statement of what the churches stand for, deliberately avoiding ‘hot button’ language,” said Christian Iosso, coordinator for the Advisory Committee on Social Witness Policy for the PC(USA). “The Trinitarian format, loved by the Orthodox churches, was suggested by Patty Chapman, a marketing executive as well as Christian educator who served on the Presbyterian writing committee.”

Iosso also noted the ecumenical unity encouraged by the creed.

“The ‘Social Creed’ is non-doctrinal and thus provides a consensus base for ecumenical mission and advocacy, especially in an election year. Would that we were doing more with our ecumenical partners in every area!” 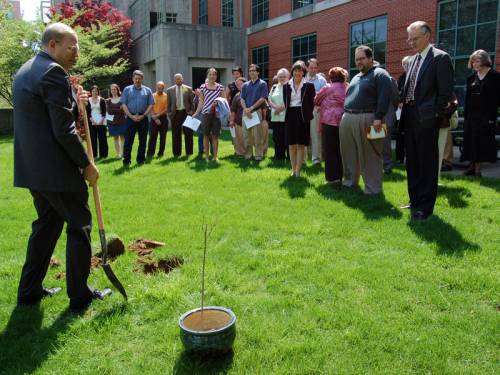 A tree was planted outside the PC(USA) headquarters in Louisville, Kentucky, in 2008 to commemorate the adoption of “A Social Creed for the 21st Century.” Wielding the shovel were the Revs. Drs. Cliff Kirkpatrick, who served as the Stated Clerk of the General Assembly of the PC(USA), and Michael Kinnamon, who served as the General Secretary of the National Council of Churches of Christ in the USA.

This past Labor Day marked the 10-year anniversary of “A Social Creed for the 21st Century,” an ecumenical message of hope adopted by the Presbyterian Church (U.S.A.) and the National Council of Churches of Christ in the USA. The creed’s foundation lies in the Christian bases of faith, hope and love and offers a vision of society that “shares more and consumes less, seeks compassion over suspicion and equality over domination, and finds security in joined hands rather than massed arms.”

The original “Social Creed of the Churches,” created in 1908 by the Federal Council of Churches, was a pledge to work toward a better, fairer and more faithful United States. The turn-of-the-century Industrial Revolution had devastating consequences for workers, families and even children who were forced into labor instead of school or play. Wealth generated by the early industrialization period was distributed to the few — primarily the owners of industry.

As with the original, “A Social Creed for the 21st Century” was compiled with ecumenical consultation and adopted unanimously by the Governing Board of the National Council of Churches of Christ in the USA, which unites 34 member churches. The 2008 version is more holistic, focusing on renewing a social covenant with greater justice, equality and democracy, less war abroad and punishing racial and class division and an urgent call to a green transition to renewable energy. 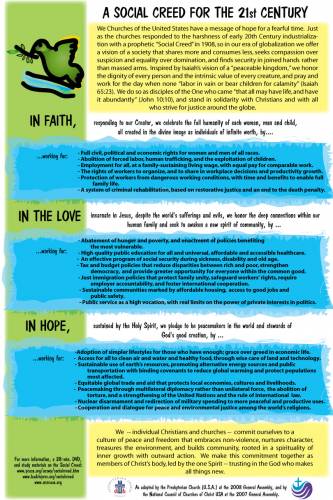 Several resources are available to aid congregations and individuals to teach and work with the “Social Creed,” including:

The “Social Creed” lifts up Jesus’ words in John 10:10, that he came so that we might have abundant life.

Christ the Reconciler, give us strength and joy in your great calling, in season and out of season, for you are within and beyond all our works and touch more people than we know. Amen.