Ministry in the halls of power

Faith is not just personal; it’s political. Our leaders pass laws about how we treat one another, laws about money and more. The Bible addresses these issues as well in Scriptures like the Ten Commandments, the parable of the sheep and the goats, Sabbath rules and Jesus’ advice to the rich young ruler to sell his possessions and give to the poor. To say the Bible and Jesus are not political is to deny their influence and relevance to our lives in the 21st century. 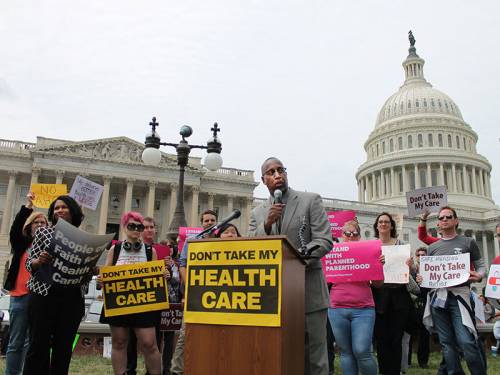 While some Presbyterians prefer to keep their political views private, the PC(USA) Office of Public Witness and the Presbyterian Ministry at the United Nations are outward expressions of how the Presbyterian faith interacts with power. The offices take decisions made at General Assemblies and advocate on behalf of the denomination in two of the most influential cities on the planet — Washington, D.C., and New York City.

As the director of the Office of Public Witness in Washington, D.C., some days Jimmie Hawkins’ work involves being arrested for protesting policies that hurt people, some days he meets with elected officials about gun control or other issues, and other days he trains church members on how to be advocates for God’s justice with their local leaders.

Hawkins and the other staff in Washington, D.C., are part of a coalition of 65 faith-based organizations that work together to witness to their faith in the halls of power.

Together, when their theology aligns, ecumenical groups work to lobby members of Congress, plan events and suggest policies in line with Jesus’ teachings.

“We trace our history to John Calvin advocating for the improvement of sewer systems in Geneva in the 16th century. In Jesus’ ministry, he flipped the tables in the Temple. We carry on these traditions of challenging an unjust status quo as exemplified by Jesus and Calvin,” Smith said. 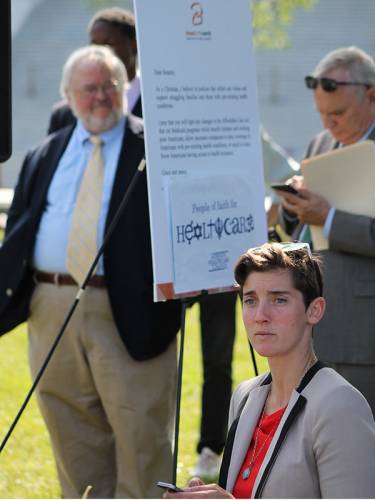 Nora Leccese, former associate for domestic poverty and environmental issues in the Office of Public Witness, says the office’s advocacy work involves people they agree with and people they don’t.

At times the denomination works independently; at other times, it works in partnership among many. The work occurs in front of cameras and behind the scenes.

“Advocacy isn’t just about going to protests. Just having conversations with people who think differently is advocacy, too,” she said.

Working partnerships are important at both the Office of Public Witness and the Presbyterian Ministry at the United Nations. Much of the work done at the United Nations is done in coalition with other denominations and groups. Although members of the PC(USA) make up just .02 percent of the world’s population, working with other denominations and nongovernmental organizations broadens the global influence the denomination can have. 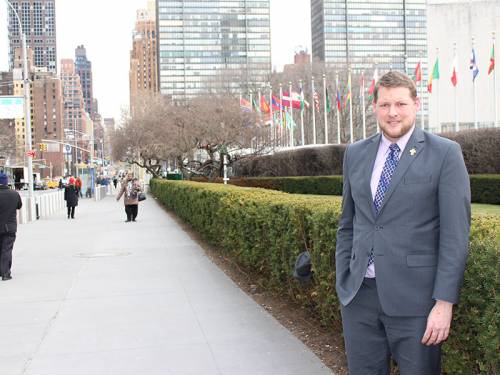 Ryan Smith, director of the Presbyterian Ministry at the United Nations and the PC(USA)’s representative to the U.N., works with ecumenical partners to advocate for God’s justice. Photo by Sue Washburn

The Presbyterian Ministry at the United Nations allows the Presbyterian voice to be heard by a world audience and contributes to the global agenda. Smith’s ministry includes attending conferences, making statements and taking part in advocacy and networking.

“We work on some of the world’s most complex challenges,” Smith said. And the work is global in scope, addressing such issues as migrants and refugees, Middle East peace, climate change and human trafficking.

The Ministry at the United Nations also hosts a monthly open house for Presbyterians to learn more about the different topics the ministry addresses.

Doong says that while it’s best to work for God’s justice in person, Christians have new ways of working for justice — online tools.

“Advocacy can be as simple as sharing a hashtag or coordinating gatherings with people on social media,” Doong said. “With the rise of social media, we all have more of a voice.”

Today’s Focus:  PC(USA) Office of Public Witness and the Presbyterian Ministry at the United Nations